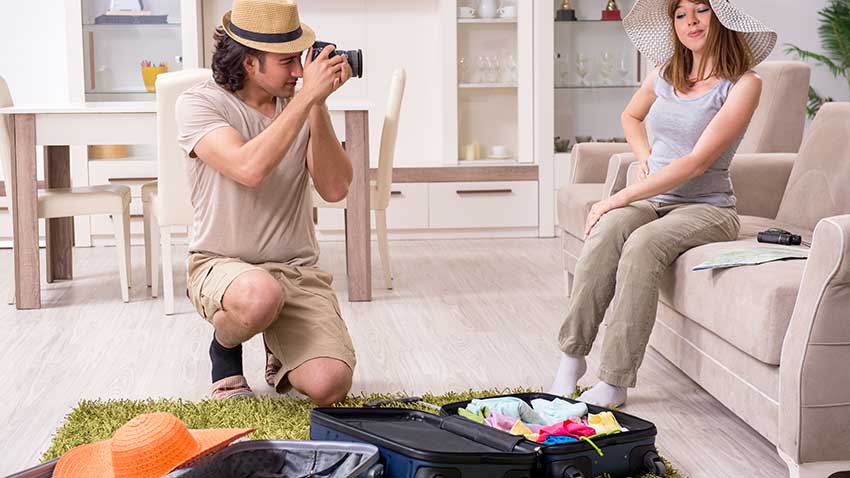 Traveling with camera gear isn’t as complicated as you might think.

Which is great because often it’s when on vacation or when taking a trip somewhere that we want to take more photos.

Let’s look at the rules around flying with a camera and best practices for where photographers should pack their gear.

The Transportation Security Administration are the folks that run the airport security checkpoint.

Here is what they have to say about bringing camera equipment on to planes.

Can you bring a camera in carry-on luggage?

Yes. You can bring a camera in carry-on luggage through airport security. This is usually the best place to pack camera equipment.

Check the personal item sizes for the airline you are flying with. You might be able to use your personal item allowance to bring a camera bag and a carry-on suitcase.

If you are flying on a low-cost airline or on a basic economy fare you might not be permitted to bring two bags. Airlines such as Spirit or Frontier only permit you to bring a personal item size bag.

You will need to decide if your can pack your camera in one bag alongside your clothes or if you need to purchase a carry-on allowance.

A camera bag like this one will fit under the seat in front allowing you to pack clothes in your carry-on bag.

It has separate compartments for lenses, the camera body, flash units etc. Never pack a DSLR camera with the lens attached.

Make sure you choose a camera bag that is compliant with the baggage policies of the airline you are flying with so you can bring it onto the plane.

Also be aware that in-flight theft is a slim possibility, especially on longer flights.

Do you have to take your camera out at airport security?

When you get to the security checkpoint you will need to remove your camera from your carry-on bag and place it in a separate bin.

Any electronic device larger than a cellphone needs to be removed from carry-on bags. This is because these items obstruct the screening process.

So if your camera is larger than a cellphone remove it from your bag and put it on a tray when you get to the x-ray machine.

Can you bring a camera in checked luggage?

You can bring a camera in checked luggage but it’s rarely a good idea to pack valuables or breakables in checked bags.

There is the chance that your entire checked bag could be lost or delayed. Or your camera equipment could be damaged by baggage handlers throwing your luggage around.

Worse still your camera could be stolen either by TSA staff or airline staff and it will be difficult to get compensated. Also you might lose the photos that are stored on the camera.

For all these reasons it’s usually better to pack your camera in hand luggage especially if you are packing an expensive DSLR camera. Packing digital cameras in checked baggage isn’t usually a risk worth taking.

Take note. You are not allowed to pack loose uninstalled camera batteries in checked bags. So any spare batteries you have for your DSLR should be packed in hand luggage.

If you have further questions about bring camera gear on a plane you can ask the TSA on Twitter.

Just write to @AskTSA and they usually get back to you within 30 mins.

Edward asked about bringing a retractable cell phone tripod in his carry-on bag. The TSA answered that “tripods are allowed in carry-on bags”.

Scott asked if he would need to remove camera lenses from his bag when going through the x-ray machine.

The TSA said that “camera lenses don’t need to be removed from carry-on bags for screening”.

Triniti asked the TSA if she had to remove the film from her camera when it was going through the x-ray machine.

Film doesn’t need to be removed from cameras however high speed film (800 ISO and higher) should be physically inspected instead of x-ray screening.

You can request a physical inspection by a TSA officer.

Airline staff, baggage handlers, and TSA agents all have access to your checked bags.

That’s why it’s never a good idea to pack something valuable like a camera in checked baggage.

This traveler was concerned that the x-ray machine would damage the information on his memory cards.

If the x-ray machines at screening damaged memory cards they’d also ruin the thousands of laptops that go through daily. The data on memory cards is safe from the x-ray scanners at the airport.

If you don’t take your camera gear out of your carry-on the be aware that the TSA might do it for you.

They removed Christphe’s camera equipment for inspection but the didn’t realize. In the mixup he lost his camera gear.

Thankfully he was able to be reunited with this gear.

Paul asked this TSA about bringing this tripod.

Usually items that you could use to whack someone on the head are not allowed in carry-on bags. For whatever reason the TSA has decided that tripods are not potential weapons and they are allowed in the cabin.

Shelby checked that it would be okay to bring a camera charger in hand luggage.

The TSA said that “camera chargers are good to go in carry-on bags”.

You can bring a camera onto the plane. It’s usually safest to pack it and any accessories in carry-on luggage.

The one rule you need to be aware of with camera equipment is that you cannot pack loose uninstalled batteries in checked luggage.

For airlines that allow you to take 2 pieces of hand luggage often a personal item size camera bag is a good bet to transport your camera securely.

If you are traveling outwith the United States then be aware that many foreign airlines have carry-on weight limits. Camera gear could be the very type of thing that puts your over a weight limit.

As with all large electronics, travelers need to remove cameras from suitcases when going through the x-ray machine.