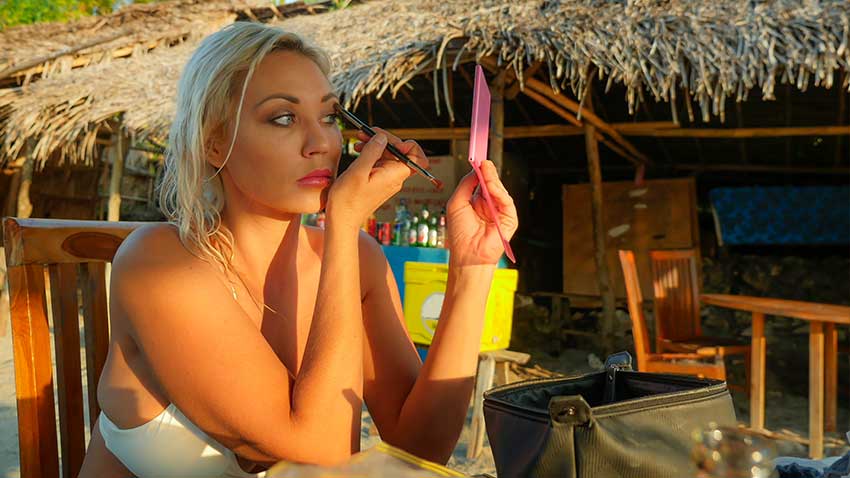 Bringing eyeshadow on a plane is more complicated than it first looks.

The answer depends on what type of eyeshadow you are asking about and where or not the eyeshadow is considered to be a liquid by the TSA.

The most popular type of eyeshadow is powder eyeshadow.

Powder eyeshadow palettes do not count as a liquid and you don’t need to put it in your clear quart bag. Hurrah!

Here’s the TSA answering Shanelka on Twitter just to prove it:

The TSA answered that “pressed powders are allowed in carry-on bags with no quantity limitation. Makeup in liquid or cream form must be in containers that are 3.4 ounces or less and placed in a single quart-sized bag with other travel-sized liquid items”.

There is 1 rule that could theoretically apply to powdered eyeshadow and cabin luggage. I suppose I should mention it to give a complete answer.

All powders over 12 oz or 350 ml need to be x-rayed at airport security if you are taking them in your carry on bag. But powder eyeshadow products are usually nowhere near this limit so no need to panic.

So far so good… here is the complication…

Cream eyeshadow is considered a liquid by the TSA so it should be in containers no larger than 3.4 oz (100ml) and packed in your quart-sized transparent bag.

Obviously, liquid eyeshadow is a liquid too so it would also need to go in the clear bag and in small travel-sized containers.

Crayon stick eyeshadow is not considered a liquid so you can pack that inside your toiletries bag.

As always the final decision about what is or isn’t permitted onto the plane is taken by the TSA officer at airport security.

Does Eyeliner Count As A Liquid?

When it comes to pen eyeliners that have fluid inside the answer is not so clear. You don’t need to put a ballpoint pen in your liquids bag even though it has liquids inside. I suspect that most liquid eyeliners would be viewed in the same light.

However, if you are taking a big fat pen that has a significant capacity for fluid inside then you’d probably be better to pack it in your liquids quart bag.

I have one general tip that I can give you:

Check the size specified on the label of your cosmetics. If it’s listed at fluid ounces (FL Oz) then definitely going to be counted as a liquid and restricted when flying.

If it’s listed only in oz that doesn’t mean that it’s ok. Creams, gels, pastes (the bad ones) are sometimes listed in grams and ounces. But if a beauty product says fluid ounces then you know for certain that it’s restricted when flying.

You can bring eyeshadow palettes on a plane in carry-on luggage or checked luggage without limits.

Remember, you can always put cosmetics into checked luggage and not worry about liquid limits. These rules only apply to hand luggage.