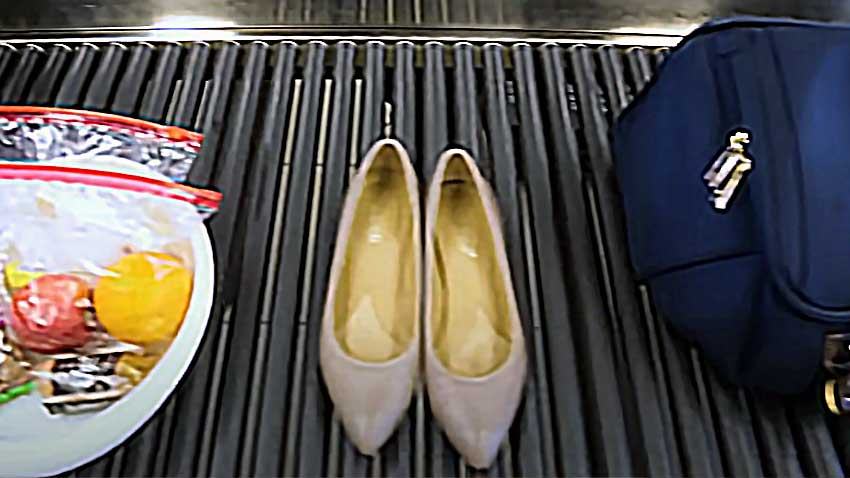 The Transportation Security Administration has been asking travelers to remove shoes as part of the security screening process since 2006.

The policy was introduced after a passenger attempted to detonate an explosive device concealed in his shoe on a flight from Europe to the United States.

This post clarifies what the situation is with removing shoes at TSA airport security checkpoints in 2022 and what exceptions to the TSA shoe rule exist.

Removing shoes at airport security is still a requirement for most standard lane passengers in 2022. The TSA still directs passengers to this video:

At around 1 minute the TSA states:

All removed footwear should be placed soles down on the x-ray conveyor belt or in a bin with nothing in, on, or under the footwear.

Just to be sure the video is up to date I checked with @AskTSA on Twitter:

The TSA confirmed to me that passengers still need to remove footwear when going through the standard security line.

Since you are probably going to need to take your shoes off it’s a good idea to wear socks. That way you won’t be walking around with bare feet where you could potentially pick up a fungal infection like athlete’s foot.

Exceptions To The TSA Shoe Rule

One exception to the TSA shoes rule is that passengers over 75 don’t need to remove their shoes at the screening checkpoint.

Here’s Stephanie asking the TSA about that:

The TSA replies, “Passengers 75 & older may leave their shoes and light jackets on at the checkpoint”.

Another exception to the TSA shoe rule is children under 12.

Angel discovered that three of her teenagers would need to take their shoes off but the youngest one who was 12 would be able to keep them on at the checkpoint:

Children 12 years old and younger may leave their shoes on.

So it seems that while the TSA is worried about dangerous items being concealed in shoes they think that it’s only people aged between 13 and 74 that could be up to no good.

Removing shoes is an inconvenience for sure, but continuing to screen the footwear of most passengers using the x-ray machine allows TSA officers to check nothing suspicious or dangerous is concealed inside shoes.

What type of shoes are best to wear at airport security?

Remember that in the event of an emergency landing you might need to evacuate the airplane quickly.

You don’t need to dress like a track sprinter, and as it happens, track shoes with metal spikes on the soles can only be packed in checked luggage.

But flip-flops or other shoes that easily fall off are not a good idea.

Likewise, high heels will not be the most sensible shoes to be wearing should you ever need to evacuate the plane before you succumb to smoke inhalation. They can also puncture the emergency escape slide.

I don’t like to be a panic merchant. Flying is very safe and it’s unlikely that you ever will need to evacuate a burning plane. So relax, but I do recommend wearing comfortable walking shoes or sneakers at the airport and on the plane.

You might consider bringing a shoehorn to the checkpoint to help you remove your shoes.

Here’s what the TSA says about bringing shoehorns through airport security:

The TSA recommended packing her large metal shoehorn in checked luggage rather than carry-on luggage since it could be considered to be a weapon by a TSA officer.

On the other hand, Anne received a slightly different response:

So a short plastic shoehorn will be fine to pack in your hand luggage. A long metal shoehorn won’t be permitted through the checkpoint since you could use it to whack someone on the head.

As a general rule, metal tools should be under 7 inches long to be allowed in hand luggage.

When will the TSA shoe rule stop?

There is hope for the future.

There is some new technology that allows passengers’ shoes to be screened without removing them but at present, these machines still haven’t been installed at the screening area of most airports so travelers in the standard lane still need to remove their shoes.

But is the TSA sufficiently motivated to introduce these new machines?

For the conspiracy theorists out there…

Inconveniencing travelers by asking them to remove shoes is a bit of a moneymaker for the TSA.

The TSA raises funds through its TSA Precheck scheme.

Travelers that pay to get TSA Precheck status don’t need to remove their shoes at the security checkpoint.

These travelers go through security in the Precheck fast lane since they are have already been vetted and deemed to be less of a threat to aviation security. One of the main perks of Precheck is that you don’t need to take off your shoes in the TSA Precheck security line.

But security officers do still sometimes ask Precheck travelers to remove their shoes as they did with Michael:

Even though Michael had paid for PreCheck the TSA agent still made him take off his shoes at the checkpoint. Here’s how the TSA responded to that:

Our officers have the discretion to ask passengers to undergo additional screening, such as removing a laptop/shoes, even in the TSA Precheck lane

If the TSA brings in these machines that can scan shoes without taking them off fewer people might sign up for TSA Precheck.

If you are aged between 13 and 74 you still need to take your shoes off at airport security when traveling in the United States.

And it began because one idiot tried and failed to blow his feet off on a flight.

Passengers spotted the guy and restrained him.

Here’s what was left of his shoes after the incident:

The risk that someone else might try the same thing remains.

The metal detector that you walk through at security detects metals, obviously. It cannot detect flammable liquids and that’s why shoes need to be removed and put through the x-ray machine.

Scanning the shoes lets a security agent review the image to see if there is anything strange about the structure of the soles of your shoes. It’s not the shoes that are dangerous, it’s what might be hiding inside the soles.

I find remembering that it’s all for safety helps me keep calm when going through the checkpoint.