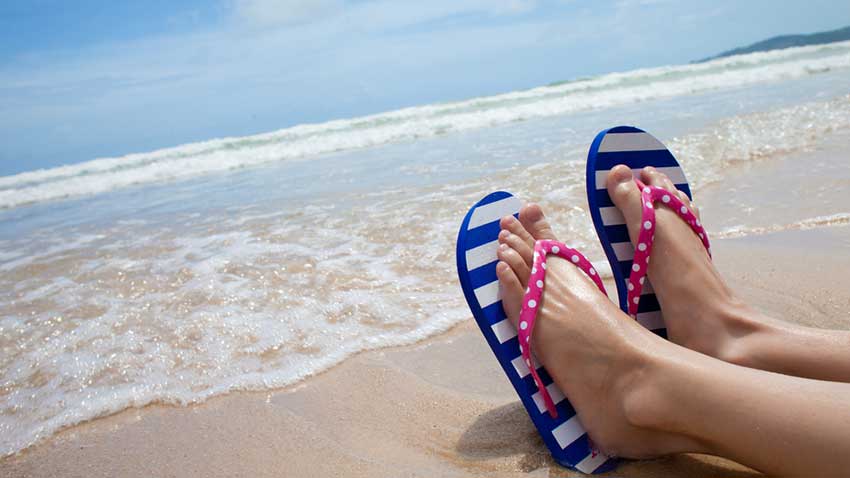 For some passengers wearing closed shoes on a plane for long periods of time is unappealing. Your feet can become hot, swollen, and uncomfortable.

Flip-Flips or slides seem like they might be a solution. So can you wear flip-flops on a plane? And do you need to take flip-flops off when going through airport security?

You might have hoped that wearing flip-flops at the security checkpoint would prevent the need to remove your shoes and put them through the x-ray machine.

Unfortunately, that’s not the case. Here is the TSA answering the question on Twitter:

That means you still need to remove your slides or flip-flops at the security checkpoint and unless you wear socks you’ll be walking around in bare feet.

But what does the TSA mean about “standard lanes”?

Deborah also asked the TSA on Twitter about keeping her flip-flops on while going through the security checkpoint.

So a more accurate answer is unless you’re in the TSA Pre✓® lane, shoes including flip-flops need to be removed prior to screening.

So if you have signed up for TSA Precheck you will be able to keep your flip flops on when going through airport security. TSA Precheck passengers have been security vetted prior to flying and are seen as less of a risk.

But the rest of us muggles in the standard lane do need to take their flip flops off and put them through the security scanner.

Keep in mind that if you are late or delayed you might end up needing to run to catch your flight. Running in flip-flops while carrying luggage is a little bit dangerous so flip-flops might not be the best type of shoes to wear at the airport.

One exception to the shoe rule is for those over 75.

“Passengers 75 and older can receive some form of expedited screening”. So if you are over 75 you might be able to keep your flip-flops on even in the standard screening lane.

But getting your flip-flops past security isn’t the only issue. Airlines have dress codes. So are airlines happy with you wearing displaying your feet?

Do Airline Dress Codes Allow You To Wear Flip Flips On A Plane?

In days gone by airlines had much stricter dress codes.

These days you are unlikely to get in trouble with the flight attendant for wearing flip flops.

However, you might get some unwelcome glances from other passengers. Not everything thinks that leisure footwear is appropriate for wearing on a flight.

Chris was flying with American Airlines and made this comment:

When Delta asked passengers to share a favorite photo Lee complained about having to look at people wearing flip flops on the plane:

So Delta lets people wear them on the plane but other passengers might not appreciate it.

Sammy thinks that anyone wearing flip-flops on a plane with no socks should be banned from flying:

My personal view this that flip-flops are not a sensible choice of footwear when flying anyway.

For one, your feet might get cold if you are not wearing socks.

And also. Flying is very safe, but it’s not 100% safe. In the event of an emergency landing, the big worry is fire and smoke in the cabin. Many passengers actually survive plane crashes only to die from smoke inhalation because they can’t exit the plane quick enough.

Here’s a little video of a plane evacuation. Would you want to be wearing flip-flops?

A British Airways flight from London Heathrow to Valencia was forced to make an emergency landing after thick smoke filled the cabin. Passengers on BA422 were evacuated via slides with the plane still on the runway https://t.co/wrgaEdUJa0 pic.twitter.com/MOWK9rclMU

Remember all those times the flight attendants pointed out where the emergency exits are? There’s a reason for that!

I don’t know about you, but if I was trying to exit a burning plane I wouldn’t want to try doing it wearing flip-flops or slides. It’s hard to run from a burning plane with high heels, backless shoes, or backless sandals.

So if you don’t mind upsetting your fellow passengers with your exposed feet then wearing sandals that are properly strapped to your feet would be a better option.

Wearing flip-flops at airport security won’t save you any time. If you want to avoid removing your shoes at the security gate the best way to do that is to sign up for TSA Precheck.

You can wear flip-flops on the plane but many of your fellow passengers might disapprove.