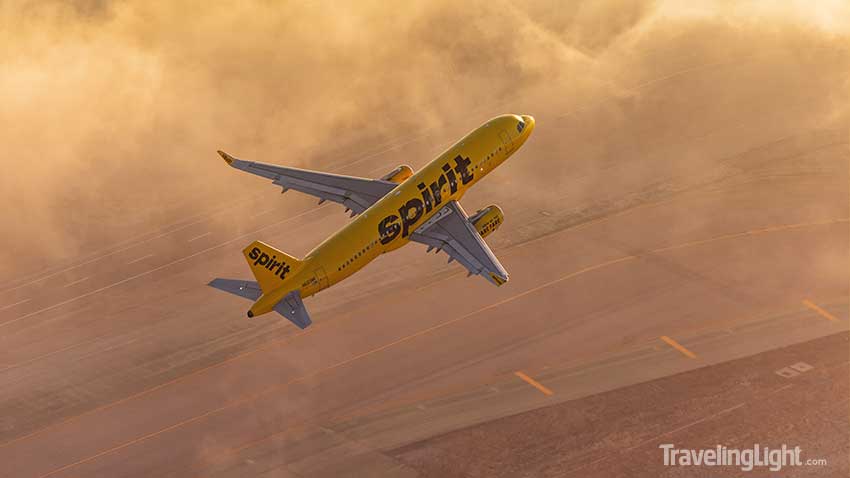 Spirit Airlines are often ridiculed because they are a low cost carrier.

As well as the jokes there are also the bad reviews from some passengers that flew Spirit Airlines.

A lot of people get pissed when they end up paying extra fees for add ons like seat selection, carry-on bags, extra legroom, water, and snacks.

They go online outraged and bad-mouth the airline. Insults get thrown and claims get exaggerated.

Sure, these charges can be annoying especially if you didn’t read the rules and anticipate them, but is Spirit a dangerous airline just because they don’t include free peanuts?

Some people are scared to fly with Spirit because they think if the seats are cheap, everything will be cheap and that means it’s unsafe.

These fears are unfounded, aviation safety doesn’t work like that, and Spirit Airlines is safe to fly.

This post will prove it to you to put your mind at rest.

When anything goes wrong with a Spirit flight people assume it’s because they are cheap.

When the plane hits some turbulence Spirit get the blame for being cheap:

But Jon… turbulence has nothing to do with which logo is painted on the plane. It’s just rough patches of air.

Or if a Spirit flight gets delayed:

Spirit gets bad-mouthed as being unreliable. Yet the stats show that Spirit flights arrive on time more frequently than some “big” airlines like American Airlines or United. It was unfortunate that Darian’s travel was delayed but it happens more often with other airlines.

He’s suggesting you if you travel with Spirit you’re either going to lose your luggage or not arrive safely.

Yet Spirit has a pretty good record of not losing luggage. Last year Spirt lost fewer bags per 1000 passengers than Delta, United, and American. Spirit lost only 5.3 whereas United lost 7.1 and American lost 7.9 bags.

You see what is happening? Any time a problem occurs the fact that Spirit is cheap gets the blame. But in reality problems occur with full service airlines too.

And the fear about arriving safely is completely unfounded too.

People are presuming that since Spirit is cheap they must be unsafe, but the facts tell a different story.

Spirit Airlines have a good safety record, they’ve never been involved in a major accident.

They have a modern fleet of aircraft. Many of the planes that Spirit fly are newer than legacy airlines.

Spirit’s planes are mostly from the Airbus A320 family. You do realize that Spirit doesn’t build their own planes right?

And guess who else uses Airbus aircraft?

Delta, United, American, JetBlue, and loads of other non-budget airlines.

You might be thinking that Spirit are too cheap to maintain and repair their aircraft.

But airlines are continually inspected by the Federal Aviation Administration (FAA). Yes, it’s the job of the government to certify the safety of aircraft and make sure they are safe.

Budget airlines like Spirit are required to get the same certifications as legacy airlines.

Take it from Les Dorr of the FAA:

“Every airline, whether it’s a budget airline such as Spirit, or a legacy line such as United, must meet the safety regulations set by the FAA, since everyone meets the same standards, there is no airline that is safer than another.”

So when Joe Bloggs or Consumer Reports says that Spirit Airlines is the worst airline that has nothing to do with the safety of Spirit.

These are reviews of the customer experience. Some think Spirit is a bad airline because their bare fares are so basic.

I addressed this topic in another post. I’ll just say here that I don’t think Spirit is a bad airline, they have a different pricing model where it’s cheap fares + expensive everything else.

If you know how to fly Spirit and your expectations are in line with the fact they are a budget airline you can have a great experience.

Flying Spirit is just as safe as flying other US airlines.

Lack of legroom might cause your knees to hurt after flying but I wouldn’t class this as a safety risk.

And if you think you would like extra legroom you can simply purchase one of the big front seats for a reasonable price.

Getting hit with a $65 penalty if you exceed the size limit for a personal item might cause your blood pressure to go through the roof. But that’s not really an aviation safety issue and you can avoid these shocks by knowing what the rules are.

You might be bored because there is no in-flight entertainment. But boredom isn’t dangerous and you can just download a movie to your phone or tablet.

You might find it a challenge to pack everything you need in their small personal item, but ending up needing to pay extra money for a checked bag isn’t a safety risk it’s a financial risk.

Spirit safety procedures are equal to other US airlines. Airlines are simply not allowed to cut corners on safety, they are regulated.

So Spirit is a safe airline, the only danger flying Spirit is in not understanding how their pricing model works.

The risk is that you will be hit in the pocket, but don’t worry you have as much chance of arriving safely as you do with those other expensive airlines, and flying is a very safe mode of transport.

One of the great things about traveling light is that it enables you to fly on budget airlines and avoid all these annoying extra fees. So I encourage you to visit our page on packing light to see if you think you could downsize your luggage and fly with Spirit for their cheapest fare.

Or spend the money you save on checked luggage on those comfortable big front seats!