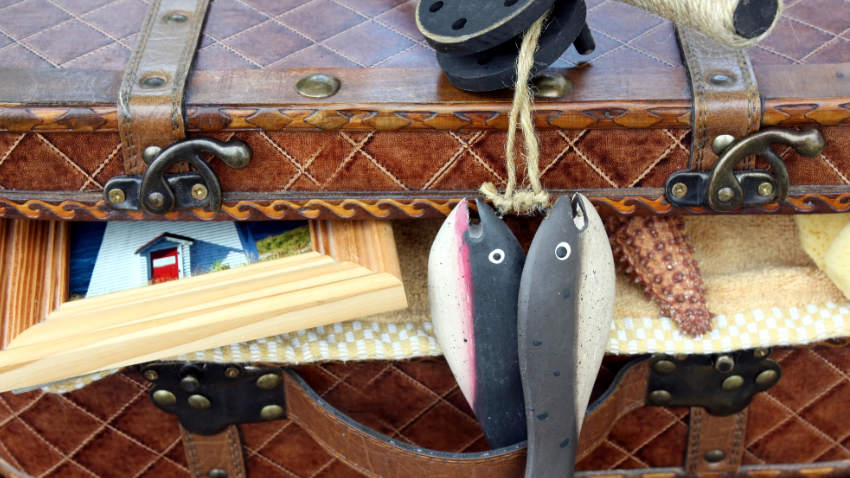 The Transportation Security Administration (TSA) oh-fish-ally controls what is or isn’t allowed through security checkpoints at airports in the US.

There’s fresh fish or frozen fish, fish in a can, or live fish that we keep as future seafood or as pets.

This post covers how to travel with fish of all types. Weirdly the rules change whether the fish in question is swimming when your luggage is inspected by the TSA or not.

Read on to find out why.

Bringing Fresh Fish Or Frozen Fish On A Plane

This is the relevant rule from the TSA about bring fishy seafood on a plane:

You can take fish on a plane in both carry-on luggage or checked luggage.

So you can bring your catch in the plane. Remember that the TSA officer might want to inspect your fish to check that it’s really just a fish.

A clear transparent container would work well for this. Or at least a container that can be opened and closed easily.

Wrapping fish in a sealable plastic bag is a good idea too. You don’t want to stink out the entire cabin.

For longer flights it’s a good idea to pack your fish with either ice packs or dry ice to keep it fresh.

The key here is that your ice cannot be melted when you go through the security checkpoint.

Ice frozen solid is permitted through the checkpoint.

The final decision rests with the TSA officer who inspects your luggage.

Bringing Canned Fish On A Plane

We’ve talked extensively about bringing canned foods on to planes before. In short, if your canned fish e.g. Tuna contains some oil or liquid then the can can’t be larger than 3.4 oz when packing it in carry-on luggage. And your little can of Tuna would need to be packed along with your toiletries.

On the other hand, you can packed canned fish in checked luggage without restriction.

Bringing Live Fish Or Seafood On A Plane

So what if you want to keep your fish alive when you travel.

Maybe it’s your pet or emotional support fish, or maybe you just want to eat it later.

But if you want to keep your fish alive then you’ll need to bring some water.

Anyway here’s the relevant rule from the TSA web site about flying with live fish:

As you can see, luckily for your fish friend the usual liquids rule doesn’t apply.

You can bring live fish through security and on to the plane in your carry-on baggage in water IF the fish is swimming in the water.

So like Dory says in Finding Nemo… “Just keep swimming!”.

Because when airport security can see that the fish is alive and swimming about then they know it’s really only water and not a flammable liquid.

But if the TSA sees your fish isn’t swimming then you’re just bringing a dead fish and a lot of suspicious liquid that isn’t permitted on the flight.

So if you want to bring live tropical fish or betta fish on a plane then you can bring them in breather bags or a clear plastic or glass transparent spill proof container. When security sees that your fish is alive the water will be permitted through the security checkpoint.

Allow extra time to pass security if you are traveling with live fish. Most TSA agents won’t have seen this situation very often and while the rules permit live fish and their water through the checkpoint their might be some confusion.

Also, if you are transporting live fish then it’s always best to check your airline rules too.

Traveling With Fish On International Flights

If you are crossing national borders then you don’t just need to worry about domestic TSA rules.

You’ll need to consider the import and export rules of the countries you are flying between.

That includes the U.S. Customs and Border Protection rules when you are flying back home.

So if you are importing live fish or even dead fish then check the customs rules of your destination country and departure country.

You might possibly need the appropriate export permits for flying internationally with fish.

If you have a specific question about flying with fish you can reach out to the TSA on Twitter.

Zane asked if each small live fish needed to be in it’s out separate container:

The TSA doesn’t limit the number of live fish that you can bring through the security checkpoint.

Allan was bringing a gold fish on the plane:

The TSA said it would be okay but advised Allan to check with his airline too.

Robotic singing fish are allowed to be packed in carry-on or checked luggage.

Someone flew with crabs in their checked luggage and they escaped!

WHO FLEW WITH CRABS?! pic.twitter.com/c0cux6Jyyi

The TSA are tasked with maintaining aviation security. From their point of view fish are not considered an aviation threat whether dead or alive.

The only security concerns relating to transporting fish are around liquids.

Whereas liquids are usually limited to 3.4 oz in carry-on baggage the water your goldfish swims in can exceed this limit.

That’s because when the TSA officer sees the fish swimming around they know immediately that it’s really water in the container and not a dangerous flammable liquid.

International flights are a little different since you’ll need to check any rules about importing or exporting fish that apply to the countries you visit. That includes checking the rules about returning back to the US.