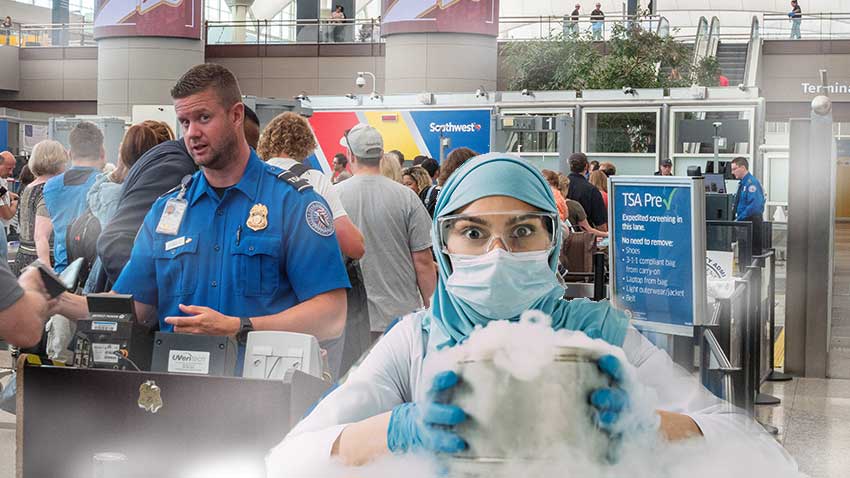 Dry ice can be considered a hazardous material so there are some rules about bringing dry ice on to planes.

Flying with dry ice isn’t forbidden and can be used to pack perishables but there are some safety regulations that you need to pay attention to.

The Transportation Security Administration run the security checkpoint. These are the people that will inspect your luggage.

This is what they say about dry ice on their website:

Note that dry ice is carbon dioxide solid so you don’t need to worry about the TSA liquids rule.

Whether dry ice is allowed in planes is down to each individual airline. If the airline chooses to allow it there are restrictions that are set by the FAA for safety.

Airline approval is required. Packages must NOT be air tight and must allow the release of carbon dioxide gas. When in checked baggage, the package must be marked “Dry ice” or “Carbon dioxide, solid” and marked with the net quantity of dry ice, or an indication that it is 2.5 kg (5.5 lbs) or less.

But the FAA also say that you need to check with the airline.

So let’s take a look at what the airlines in the United States say about traveling with dry ice.

Alaska Airlines say “Dry ice may be placed in carry-on and checked baggage” and they pretty much follow the guidelines set out by the FAA.

Note that Alaska say that dry ice will only be accepted on certain routes. So check with them if you can bring dry ice on your specific flight.

Allegiant would prefer it if you don’t use dry ice and use ice packs instead. However dry ice is allowed in carry-on bags and checked luggage under the 5.5 lb weight limit in non-air-tight containers.

The American Airlines site only mentions bringing dry ice in carry on luggage.

You can travel with up to 5.5 lbs/2.5 kgs as carry-on if it’s packed in a vented, hard plastic or heavy gauge styrofoam container and you tell a ticket or gate agent

I checked on Twitter and it appears that you can bring dry ice in checked luggage too if you follow the rules about venting and keep it under the 5.5 lb limit.

Delta also asks that “If possible, instead of dry ice, we encourage the use of gel packs or similar products to keep frozen perishable items fresh.”

The problem with gel packs is that they are treated as liquids by the TSA. You can only bring gel packs that are under 3.4 oz and they must be packed in your quart size toiletries bag.

Gel packs or ice packs might be a good solution to keep foods fresh in checked luggage but you need dry ice for carry-on luggage because it remains a solid.

Dry ice packages in amounts of 5.5 lbs. (2.5 kg) or less are allowed when used to cool non-hazardous perishables in carry-on or checked baggage.

Frontier also permit dry ice in checked and carry on luggage. You must follow the FAA guidelines.

Hawaiian let you bring 5.5 pounds of dry ice in carry on bags to help keep your food frozen.

JetBlue allow you to pack a little dry ice to protect your perishables.

Dry ice will be accepted within carry-on or checked baggage if the dry ice is contained in a package that (a) allows the release of carbon dioxide, (b) is plainly marked with the words “dry ice” or “carbon dioxide solid” together with the net weight of the dry ice and the name of the contents being cooled, and (c) the package contains less than five and a half (5.5) pounds of dry ice.

United accept perishable items packed in dry ice but they charge a fee. It will cost you between $150 and $200 to bring dry ice on a United flight.

You can take dry ice on a plane on all the popular airlines in the US.

Most airlines that allow dry ice have adopted the FAA policy.

The main thing to note is that United Airlines charge a fee to let you bring dry ice on board.