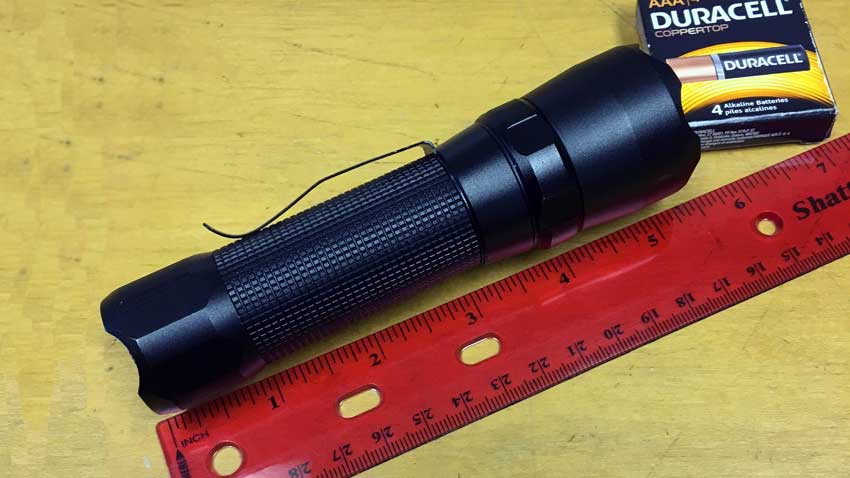 A flashlight might seem like a handy thing to pack when you are traveling. Or perhaps you need to carry a flashlight when you travel for work.

But are flashlights allowed on planes? Let me illuminate you.

Usually the Transportation Security Administration are very good at providing detailed information on their website.

In the case of flashlights, their information could do with a little bit more detail because it’s missing an important restriction. Here’s a screengrab from the TSA website.

Bringing A Flashlight In Carry On Luggage

The TSA website fails to mention that you can only bring flashlights that are 7 inches or less in your carry-on bag. The TSA confirmed this to Jeremy on Twitter.

The TSA officer always has the final say about what you are allowed to carry through airport security. Flashlights over 7 inches will not be allowed into the cabin. This is because you could use them as a bludgeon.

If you are bringing a tactical flashlight, military flashlight, self-defense flashlight or a flashlight with any weapon capabilities don’t be surprised if you are not allowed to bring it into the cabin.

You can’t bring a weapon on a plane and expect it to be permitted just because it can also function as a light.

Bringing A Flashlight In Checked Luggage

You can pack a flashlight of any size in your checked bag.

A rechargeable flashlight with non-removable lithium batteries is fine to pack in hold luggage. You can also pack a torch with an installed lithium battery.

But any spare lithium batteries for your flashlight must be brought as carry-on luggage.

How To Check If Your Flashlight Is TSA Approved

If you are still unsure whether you can bring your flashlight with you next time you fly then you can use the @AskTSA service on Twitter to get an answer.

Antonio asked if his Nitecore tactical flashlight would be permitted as a carry on. It was under the 7 inch limit but the TSA still recommended packing it in checked baggage.

Phoenix was also warned that a tactical flashlight might not be allowed past the security checkpoint.

Similarly the TSA wouldn’t promise Jose there would be no issues with his Boulder flashlight.

Jose was right that there is always a risk bringing a flashlight in carry-on luggage.

Lightweight regular flashlights under 7 inches should be fine. But if there is any sense that the flashlight has been designed to cause injury the TSA officer might refuse to permit it on board the aircraft.

And flashlights really do get confiscated by the TSA. Matthew had to had over his Streamlight ProTac 2AA.

And the TSA confiscated this passengers keychain flashlight because it was “tactical”.

And in case you are wondering…

You can’t bring a flashlight that is also a stun gun on to a plane!

As far as the TSA are concerned there is little difference between self-defense and attack. So these self-defense items are prohibited on planes.

If you want to take a flashlight stun gun you’ll need to pack it in checked baggage.

You can bring regular flashlights that are 7 inches or less in carry-on luggage. Tactical flashlights might not be permitted in the cabin.

And you can bring any size of flashlight in your checked bag but make sure you pack any spare lithium flashlight batteries in your carry-on.

You shouldn’t have any problems flying with your flashlight so long as it’s not considered to be a weapon.