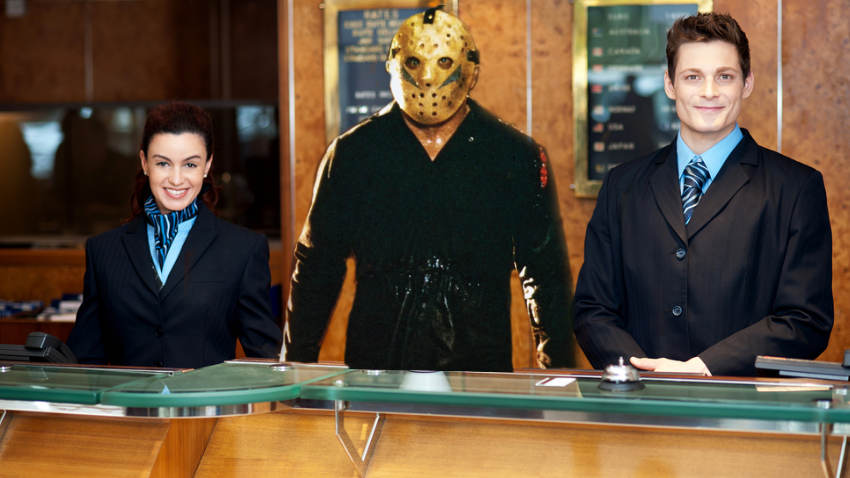 When builders of hotels and other tall buildings are naming their floors and installing their elevators they have a decision to make.

Do they create a thirteenth floor or do they skip it?

Sensible developers or hotel owners don’t believe there is any thing dangerous or unlucky about the 13th floor of the hotel.

But they do have a real world concern.

The loss of profits!

Hotels need their guests to be satisfied to run a successful business.

Why Don’t Elevators Have A 13th Floor?

Some guests get a little nervous using the hotel elevator at the best of times. We’ve all seen TV shows where people get trapped in elevators or they plummet to the ground.

Pressing the number thirteen on the elevator panel to get to your hotel room might make some guests even more uneasy.

Many people around the world believe that 13 is an unlucky number. Any superstitious guests might not like staying on the 13th floor or in hotel room 13, 113, or 213. Although it is irrational, it might ruin a guest vacation to stay on the 13th floor.

So it is commercial concerns that lead to the 13th floor disappearing. Many hotel owners simply don’t want to upset their guests or make them feel uneasy.

Why Is The 13th Floor Considered Unlucky?

The fear of the number 13 is quite common. It even has a medical name, triskaidekaphobia.

Triskaidekaphobia is the fear or avoidance of the number 13.

The origins of triskaidekaphoba are unclear. There are a few theories.

In norse mythology 13 emerged as an unlucky number. 12 gods were having a dinner party in Valhalla. The table was probably designed to seat 12. Loki, the trickster was not invited, but he turned up anyway as the 13th unwelcome guest. Loki ended up tricking Höðr into shooting Balder with an arrow cementing the number 13 as an unlucky number.

To be fair. 13 is an awkward number of guests for a dinner party!

On Friday, October 13, 1307 Philip IV of France ordered the arrest of the Knights Templar and Friday the 13th became an unlucky date.

Would you like to be greeted by Jason from the Friday the 13th horror movies at the hotel front desk?

Probably not, and that’s the reason hotels don’t have a 13th floor. In the minds of some people the number 13 is scary.

Perhaps the reason 13 got a bad reputation is simply that it’s not 12.

The number 12 has a sense of completeness and harmony, whereas the number 13…

Well 13 is just awkward and one too many! Bad luck!

Once a superstition takes hold in the human mind it’s hard to shake off. Better safe than sorry right? Even if there is only a 0.0000000000000001 % chance that the number 13 is unlucky and no evidence at all… it’s still better to not take any risks.

Princess Diana died when her car hit the 13th pillar at the Pont de l’Alma tunnel.

The Space Shuttle Columbia disaster occurred on the 113th flight of the shuttle.

It’s not only hotels. Due to human superstition prices for condos on the 13th floor would be less than on other floor. Who wants to buy an apartment on the unlucky floor!

So developers on tall buildings just skip the 13th floor when naming their levels.

In skyscrapers the 13th floor would have lower property values for offices or residential buildings. So the hoteliers and developers are driven by financial concerns.

The floor is still the 13th floor, you can’t change the physics of it but you can change the label. The devil is pretty dumb and remaining the floor seems to be enough to put him of the track and turn a scary floor into a safe one.

Do Any Hotels Have A 13th Floor?

And the iconic Empire State Building does have a 13th floor. So not every developer is afraid.

In some countries it’s not the 13th floor that is missing but the 4th.

The fourth floor is also sometimes missing in Chinese hotels because when pronounced it sounds similar to the word ‘death’.

Fair enough, I wouldn’t want to stay on the Death Floor either!

There is no 13th floor in hotels because hotels rename the 13th floor because of superstition.

As it happens as I am writing this post I’m actually staying in a tall hotel on the 12th floor.

I went out and checked the buttons on the elevator.

It turns out the 1st floor is called Floor A which means the 12th floor where I am staying is actually the 13th floor.

Something bad could happen at any mo asdgfad g sads