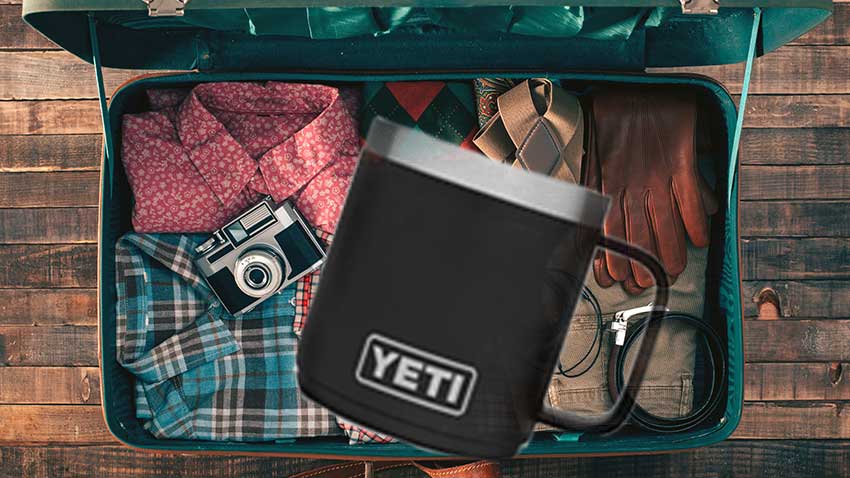 Yeti cups do a fantastic job at keeping drinks hot or cold, but are you allowed to bring a yeti cup on a plane?

Let’s take a look at the relevant rules.

The Transportation Security Administration doesn’t endorse specific brands. The closest thing to a Yeti tumbler that they mention on their website is an empty coffee thermos.

They also have this entry:

On Twitter, Matt asked the TSA specifically about bringing his yeti cup.

The TSA replied that “empty insulated cups are allowed through the security checkpoint”.

There is nothing about a stainless steel water bottle that the TSA see as a threat. They are only concerned about any liquid inside that might not be soda and could be something more dangerous.

Can you take a yeti cup on a plane in your carry-on bag?

The TSA liquids rule says that all liquids must be in containers under 3.4 ounces and packed in your one quart-size bag.

This means that although a yeti mug is allowed in carry-on luggage it must be empty when going through the security checkpoint.

A yeti cup doesn’t need to be empty when you take it onto the plane. So you can fill your yeti cup with whatever liquid you like after you’ve gone through airport security.

The only time you would be able to bring a yeti cup containing liquid through security would be if it was juice for an infant, breast milk, or a medically necessary liquid.

Can you bring a yeti cup on a plane in checked baggage?

You can pack a yeti cup in checked luggage without restriction.

Just keep in mind that there is always the chance checked luggage can go missing or be delayed.

Worse still there is the possibility that items can be stolen from checked bags.

Sara mentioned that every time she packs a yeti cup in checked luggage it gets inspected by the TSA.

Other Brands Are Available

Yeti are not the only company to make a vacuum insulated cooling cup.

This traveler wanted to take an Ozark Trail metal tumbler on his flight. The TSA gave him the green light so long as the cup was empty when going through security screening.

And Aaron was packing an RTIC cup which is similar to the Yeti Rambler but cheaper.

You can bring a Yeti cup on a plane in carry-on and checked bags, just make sure it is empty while going through airport security.

Feel free to fill it with drinks purchased after the checkpoint.