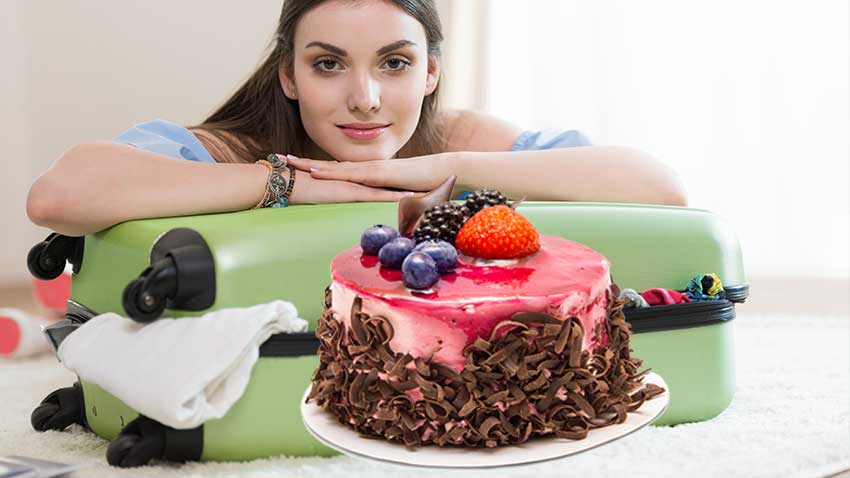 Perhaps you want to bring a birthday cake with you when you travel.

Or maybe you just want to eat some baked goods during your flight.

But can you pack baked goods in your carry-on luggage or do they need to be packed in checked luggage?

As it turns out cakes and pies are a bit tricky for the Transportation Security Administration.

The TSA often say, “If you can squeeze it, smear it, pump it, spread it, spray it, or spill it then it’s considered a liquid”

But cake frosting can be smeared and spread, and and most pies have fillings that are not solid.

The TSA prohibits passengers from bringing large quantities of liquids or gels into the cabin.

That’s because they can’t tell on the x-ray scanner if a liquid is flammable or not. Remember, in the past bad guys have tried to try to bring flammable liquids on the planes to cause mayhem.

Here’s what the TSA says about pies and cakes on their website:

This leads to the strange scenario where if you want to bring a prohibited smearable or spreadable food then you might be able to get around the rules by turning it into a pie or a cake.

So you can’t bring cream cheese in quantities over 3.4 oz because of the liquids rule.

But if you spread that cream cheese on a pastry base. That’s cheesecake! And cheese cake is permitted in hand luggage.

But frosted carrot cake is permitted.

Do you see what I mean about cakes pushing the boundaries?

Cream-filled cakes are allowed on planes.

But whipped cream alone is restricted to 3.4 oz.

Banana pudding is limited to 3.4 oz.

But banana pudding cake would be unrestricted.

Cake, including frosted cake, is generally permitted on planes in hand luggage. But if your cake was more like a wobbly pudding then it might not be permitted on the plane.

Even though the soft fillings of many pies would be prohibited, once they are in a pie they are allowed through airport security.

You can ask the TSA on Twitter about any baked goods that you might want to bring on the plane.

Jenn asked about bringing this loaf of bread:

And the TSA replied that “Bread is good to go in carry-on bags”.

Andy asked about taking a bagel on the plane:

Even though cream cheese alone is restricted to 3.4 oz and must be packed along with your toiletries it’s fine if you put it on a bagel!

So the TSA told Andy that bagels are allowed in carry-on bags.

At times the TSA rules can be a little confusing.

You can bring cakes, pies, and other baked goods on a plane in either carry-on bags or checked bags.