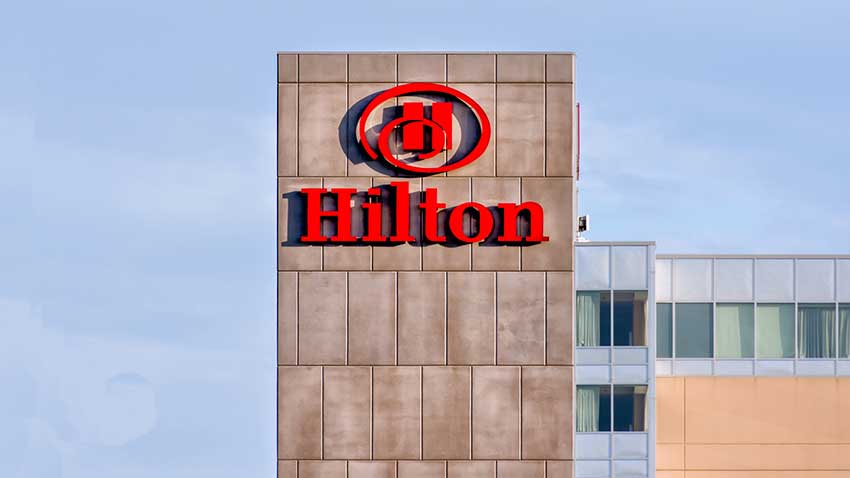 Hilton Hotels have a long history, they were founded by Conrad Hilton in 1919. Conrad’s son, Barron Hilton, took over running the company in 1966 and was involved in the business until 2007.

There are still some famous Hiltons around now like Paris Hilton and Nicky Hilton.

But who exactly owns the Hilton Hotel chain today?

Well… it’s complicated but I’ll try to keep it as simple as I can.

Who Owns The Hilton Hotels Chain?

The answer to “Who owns Hilton Hotels?” depends on how you interpret the question.

There are two better questions to ask:

Let’s look at these two questions.

Who Owns The Hilton Brand?

Hilton Hotels was sold in 2007 and that ended the involvement of the Hilton family.

Today, Hilton Worldwide Holdings Inc is a public company that anyone can buy shares in on the New York Stock Exchange.

This is the company that was founded by Conrad Hilton and used to be called Hilton Hotels Corporation.

Hilton Worldwide Holdings Inc owns the Hilton brand, and the company is owned by its shareholders.

Large chunks of Hilton Worldwide Holdings Inc are owned by institutional investors. That means that Hilton Hotels as a brand is now owned by mutual funds, pensions, and insurance companies.

But I said it was complicated…

You might be surprised to learn that Hilton Worldwide Holdings Inc doesn’t actually own all that many hotels.

Roughly, 98% of the rooms branded as Hilton are not owned by Hilton Worldwide Holdings Inc.

Instead, like McDonald’s or 7-Eleven, the Hilton runs its business using a franchising model. The parent organization doesn’t own most of the properties that have the Hilton sign above the door.

So Who Owns The Actual Physical Hilton Branded Real Estate?

The actual Hilton properties that you visit are mostly owned independently.

These individuals or corporations pay a franchise fee to Hilton Worldwide Holdings Inc so that they can use the Hilton brand or brands and operating procedures.

Hilton is a powerful brand, and if you are an independent hotelier you can expect to grow your business if you are associated with the Hilton name and show up as a Hilton Hotel on the Hilton booking system.

Does The Hilton Family Own Hilton Hotels?

If you’ve read the above you’ll know the answer already:

The Hilton family doesn’t own the Hilton Hotels anymore. Individual Hiltons could privately invest in the stock but they no longer control the company.

Most of the Hilton family wealth ended up in the Conrad N. Hilton Foundation, a non-profit charitable foundation that has the mission to “relieve the suffering, the distressed, and the destitute” as per the wish of Conrad Hilton.

It was after the sale to The Blackstone Group that Hilton began to focus more on the franchising business model.

This led to the situation where not only the Hilton family members don’t own the hotels anymore but the parent company doesn’t own the actual bricks-and-mortar hotels either.

What Hotels Does Hilton Own?

Hilton operates many brands and not all of them contain the word “Hilton”.

These are the Hilton brands. Some people might call them ‘Hilton owned hotels’ but really technically they are Hilton owned brands.

The Hilton Hotel ownership is more complicated than you might expect.

The Hilton family is no longer involved.

The Hilton brands are owned by Hilton Worldwide Holdings Inc which is in turn mostly owned by mutual funds, pensions, and insurance companies.

The actual hotel properties that are branded as Hilton are owned by franchisees. These are independent hoteliers that pay a fee to Hilton to use their trademarks and business intelligence.