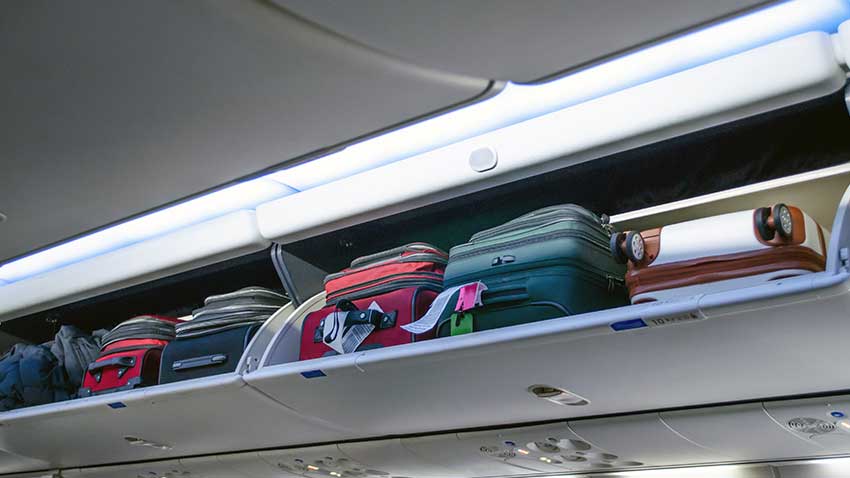 In airline hand luggage lingo there are two types of bag that can be brought into the cabin of an airplane.

The carry-on bag and the personal item.

More and more airlines are starting to charge a fee to bring a carry-on bag. Or they are indirectly charging for carry-on bags by not permitted them on their lowest class fares.

It used to be only low-cost airlines that charged for carry-on luggage. Now so-called full-service airlines are blurring the lines by offering basic economy fares that might not have so generous hand luggage allowances.

To write this post I only consider an airline’s cheapest fare class. If you are paying for a business class fare, first-class fare, frequent-flyer membership, or any other upgraded fare then your carry-on bag fee is essentially included in the inflated price.

Airlines Charging For Carry On Bags

These are the airlines in the United States charging for carry-on luggage.

The following airlines still have free carry on bags. That is to say, bringing a carry-on is included in the overall price of the ticket.

Some airlines don’t want to be associated with the dirty business of “charging for carry-on luggage”. So they come up with a system where a basic economy ticket doesn’t include a carry-on, but other more expensive fares do include carry-on luggage.

This passenger called out JetBlue for charging for carry-on luggage. JetBlue denied it.

Technically they are correct. JetBlue doesn’t charge for carry-on’s. Here’s how it works.

If you fly on a Blue Basic fare it’s cheaper but you don’t get to bring a carry-on.

But if you fly on a more expensive Blue fare you do get a carry-on.

It’s magic! JetBlue is not “charging for carry-on luggage” but customers will still need to pay more if they want to bring a carry-on!

United play at the same game.

United won’t charge you for a carry-on. It’s worse than that, they’ll charge you to check it. There is no way to upgrade a United Basic Economy ticket to include a carry-on allowance.

This way they can still say they never charge for carry-on luggage. Even though they really do in a roundabout way.

How Much Do Airlines Charge For Carry-On Luggage?

Generally, airlines keep their cards close to their chest. They don’t want you to know how much the carry-on will cost upfront.

They want you to invest time and effort in selecting your flight, then at the last minute, they’ll tell you the price. After you’ve already mentally committed to buying the flight!

You are tired and just want the job done you are more likely to give up, accept defeat, and accept the baggage fee.

And most airlines don’t charge a fixed price for carry-on bags. That would be too straightforward for the airline industry.

Instead, they have algorithms that try to squeeze the most they can out a passenger.

You can expect it will cost a minimum of around $30 for a carry-on and you’ll need to pay both ways.

Often if you pay early you will get a cheaper price. But if you arrive at the airport with a carry-on then they’ll price gauge you. Sucker!

The only way to beat them at this game is to make sure you the right size of personal item bag and learn to pack lighter.

Why Are More Airlines Starting To Charge For Carry-On Luggage?

I think the flight search engines have a lot to do with it.

A competitive marketplace means airlines want to be seen at the top of the flight search engines. Many flight search results are ordered by price with the cheapest fares showing up first.

When an airline sells everything inclusive their price is higher, it’s harder to win business.

Cheap fares usually mean that airlines need to make profits elsewhere. So they start to charge for seat selection, for priority boarding, for carry-ons, for checked bags, and so on.

Unsuspecting passengers don’t always realize that these things will cost extra until it is too late.

It’s Not All Bad

Charging for carry-on bags can improve the passenger experience.

In the early days of aviation flying was a luxury experience and everything was bundled together.

Later airlines started to charge for checked bags and more and more passengers attempted to avoid these charges by flying with a carry-on only.

This led to a lack of space in the overhead bins. Many passengers become frustrated by the scramble to find a place to store their bag.

When flight boarding is announced travelers jump up and stand in line long before the gate is opened, just to board faster and make sure they get space in the overhead bin.

Some airlines have recognized this problem, yet instead of removing fees for checked bags they have decided to implement fees for carry-on bags.

And those of us that like to travel light can benefit from cheaper flight prices!

In the United States more airlines now charge for carry-on bags than don’t.

If you know how to travel light and to pack light you can get still by without a carry-on bag. Especially if you are only going for a short trip.

The only question remaining is, who will be the first airline to start charging for the personal item? 🙂