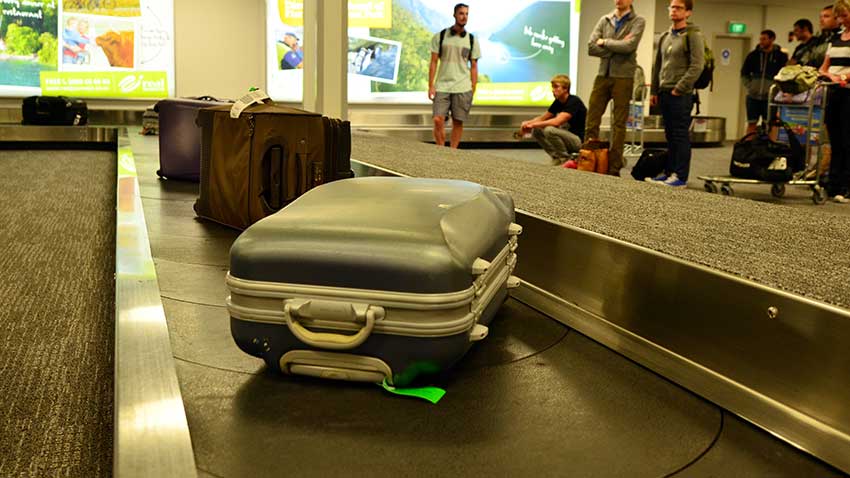 Rather than trying to list every item that you can take on a plane in checked luggage, it helps to think about what the TSA is worried about.

Carry-on luggage is taken into the cabin of the plane. So the TSA is worried about two main types of threats that could be hiding in hand luggage.

For hand luggage they are worried about weapons, or items that could be used as make-shift weapons, getting into the cabin because the bad guys could try to use them to gain control of the aircraft.

And they are also worried about explosives and particularly liquids that could be used to make explosive devices.

The main threat from items in checked luggage is hazardous materials aka hazmat – explosives, things that could start fires, or highly flammable substances.

You can probably figure out what you can pack in checked luggage just by applying that last sentence.

But read on and we’ll discuss some of the checked luggage packing items packers are unsure about in more detail.

You can pack most types of food in checked luggage when flying.

Solid foods can go in carry-on too. It’s only non-solid foods that are banned from carry-on luggage. That’s because they show up on the scanners as liquids and your jar of peanut butter might not really be peanut butter.

So for carry-on bags, any food that is spreadable, squeezable, or smearable, isn’t allowed.

But you can bring all types of food, solid or liquid, on a plane in checked luggage.

Suppose you are going on a camping trip…

It’s the same with things like lighters and matches.

This passenger wanted to bring matches and assumed they’d need to be “checked of course”.

If a small fire starts in the cabin people are around to put that fire out.

If, on the other hand, a fire starts in the checked luggage hold…

Well, there are some sprinkler systems, and praying to god but there isn’t a lot you can do. You just need to hope the pilot can land the plane before gravity lands the plane or smoke fills the cabin.

Okay, are you scared enough about fire risks yet?

The other thing you need to remember about packing food in checked baggage is any customs laws if you are traveling internationally.

There are usually laws about which foods you are permitted to bring into countries. You will be able to pack meat for example in a checked suitcase, the TSA won’t stop you, but if you take it into another country you may be breaking the rules.

So check the rules of your destination country if you are packing food.

You are probably aware that you are only allowed small travel-size bottles in your hand luggage.

And that overall you are limited to one small quart-size bag of liquids in carry-on bags.

The TSA can’t check that the liquid inside every bottle of every passenger is what it says on the label.

The TSA knows that toothpaste itself isn’t dangerous. They just don’t know that whatever is in your toothpaste tube really is toothpaste. It could be an explosive substance in disguise.

To combat this the TSA simply limits how much liquid any single passenger is permitted to bring into the cabin. That way the bad guys could only make a small one, and hopefully not one big enough to make the thing you are sitting in fall out the sky. {Note: Advertisers don’t like me to use certain words, sorry}

So what about packing liquids and toiletries in checked luggage.

All checked bags are stored in the hold and are inaccessible during the flight.

The only type of liquids that the TSA is concerned about in checked bags are flammable liquids!

As a general rule, flammable liquids and aerosols are prohibited from checked baggage, but there are some exceptions to the rule.

The first exception is toiletries. If you have a flammable toiletry or aerosol you can pack it in checked luggage, but the container must be under 18 oz. The definition of toiletry is that it’s a product that is applied to the skin.

You also can’t pack more than 70 ounces of flammable toiletries in total. The limit is per person so you can’t increase the limit by bringing two checked suitcases.

The other notable exception for packing flammable liquids in your checked bag is alcohol.

You are permitted to pack alcoholic beverages in checked luggage if it is under 70% ABV.

Liquor that is over 70% ABC is just too flammable and is prohibited in your checked bag.

If the alcohol content is between 24% and 70% you can pack it in your checked bag but you are limited to 5 liters of alcohol in total.

You can pack as much wine or beer in your checked baggage as the weight limit of your airline will allow.

Read this post to get some tips on how to pack alcohol in checked luggage without the glass bottles breaking.

Another potential cause of a fire in the luggage hold is lithium batteries.

Many electronic products we use today are powered by lithium-ion batteries.

The TSA and the FAA have decided that if a battery is installed in the device then it is safe enough to be packed in checked luggage.

That means you can pack your laptop in checked luggage if you really want to, but you’d be an idiot to do so.

You should make sure that any electrical item with an installed battery can’t be turned on accidently. If your laptop was in your checked bag, and it was accidentally powered on by something pushing against the button, the device could overheat and catch fire.

When a lithium battery is loose (not installed) the terminal ends of the battery are exposed. If any metal item in your suitcase was to accidentally connect the exposed positive and negative terminals sparks would fly!

You can pack all sorts of electric devices in checked luggage.

Power tools are permitted, but again don’t pack loose batteries. Only installed batteries should be packed.

Make sure your device can’t be turned on. Usually, this means packing it in a storage case.

Toasters, blenders, irons, coffee machines, and hairdryers are all allowed in checked bags. Just because something is electrical or has a plug on it doesn’t mean it can’t be packed.

As mentioned above it’s usually not a problem to pack weapons or self-defense items in checked bags.

All those heavy bludgeoning items that are banned from the cabin are permitted in the hold.

Sharp items like corkscrews with a blade can be packed in checked baggage.

Knives, box cutters, and other blades are fine.

But if you do pack any sharp item in your checked luggage make sure it is securely wrapped.

Any TSA agent inspecting your checked baggage should not need to worry about cutting their hand on a blade.

Of course, you’ll understand by now why you can’t pack flame-throwers in hold luggage but you can pack nunchucks.

And if you are worried about being attacked by bugs…

You can pack insect repellant that is sprayed on your skin in checked bags because it’s considered to be a toiletry.

But you can’t pack aerosol bug killer spray that you spray on or at the insect because it’s flammable and it’s not a toiletry.

Pepper spray is also an exception. You can pack a 4 oz pepper spray in checked bags. Presumably, it’s deemed to be a toiletry that you use on someone else’s face!

What You Can’t Pack In The Hold

It’s probably a better question to ask what you can’t pack in checked baggage.

If you have a question about a specific item the best way to get an answer is to ping @AskTSA a message on Twitter.

They’ll get back to you with an answer within a few hours.

Listing everything that can be taken on a plane in checked luggage would take forever.

Instead, I have tried to teach you to think for yourself.

Can this thing start a fire? If a fire starts will this product burn rapidly and help the fire spread?

And lastly, can I bring this thing into my destination country without breaching customs laws?