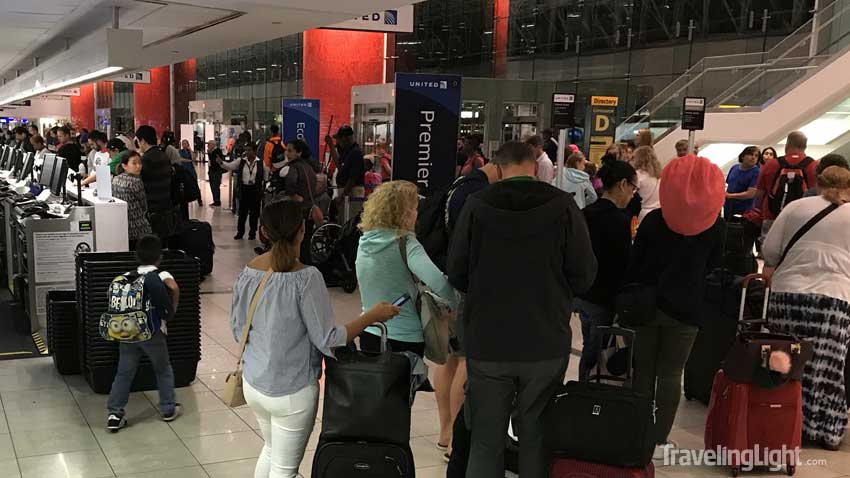 This post looks at the reactions of real passengers that tried flying United Airlines Basic Economy.

Many Twitter users are inspired to take to Twitter to express their opinion on flying United Basic Economy.

And United’s social media team are busy copying and pasting cookie-cutter apologies to all the passengers who realized too late that basic means basic.

We realize this type of fare is not for everyone. It is geared towards budget-conscious passengers who are willing to give up basic amenities, in exchange for a cheaper ticket. We apologize if these restrictions weren’t clearer when purchasing your tickets.

The phrase strikes me as extremely odd. So much so that I checked the definition of “basic amenities” again to make sure I understood correctly.

Listen, I’m not against cheap flights and fare unbundling.

And if you tell me there are cheaper fares for passengers willing to give up on luxuries then that’s great!

But fares for passengers willing to give up on essentials to make life pleasant???

Isn’t this verging on the dehumanizing?

Anyway, let’s hear what passengers who have real experience of flying Basic have to say.

You Are Your Own Carry On Says John

According to John D.

On United Basic Economy, you are your own carry-on!

But hey this is travelinglight.com, we don’t have any problem with flying with a small personal item.

There are many ways to pack light and you can fit a lot in an under-seat bag.

If you have the right credit cards and with the United brand on you might be able to bring a full-sized carry-on.

But John’s right, if you are not able to bring a carry-on you’ll need to get creative to pack for a Basic flight.

Greg Couldn’t Sit With His Family

Greg felt like he was being punished for not paying more.

The entry level Basic Economy ticket doesn’t allow you to select your own seats.

You can pay extra for advance seat assignments if you want to avoid being separated from your family and getting landed with the middle seat.

Jamie didn’t like being forced to pay extra to sit with her child.

Parents sitting next to young children seems reasonable enough to me.

I’d say that’s essential and not a luxury.

Ben Couldn’t Get Checked In Easily

Ben had a Basic Economy ticket without a checked bag.

This means that you can’t use the self-service machines to check-in.

That’s right. Even though he wasn’t checking a bag he still had to go to the bag check-in desk anyway.

But when Ben arrived at the counter there weren’t any United employees around.

There were only self-service machines that his fare class wouldn’t allow him to check-in with.

Being forced to stand in line when other passengers aren’t is one of the most demeaning aspects of Basic Economy.

And there doesn’t seem to be any good reason for it.

Two minutes later United Airline’s social media team scrambled to assure Ben that “someone should be there to assist you shortly”.

Something isn’t right when it’s easier to get in contact with the Twitter team than a check-in agent!

The agents are not coming to “assist” Ben. They’re really coming to “inspect the size of his personal item”.

Or, a cynic might say, they are deliberately inconveniencing Ben to try to make him pay for online check in, and that’s why they made him stand in line in the first place.

Mark Waited In Line For Nothing And He Knew It

Mark has a similar experience to Ben and he warns us BEWARE Basic Economy:

Mark had to wait in line for over 24 minutes even when he wasn’t checking a bag.

Alex flew Basic and had a message for everyone.

If you are over 6ft tall pay whatever it takes to get out of basic economy!

She paid 35 dollars to bring her carry-on size bag but couldn’t bring it into the cabin with her.

When you fly basic economy with United a carry-on bag is NEVER possible.

Not unless you have the right branded credit card.

I disagree with Braxton that this is discrimination against minorities.

It’s not about minorities. It’s discrimination against poor people.

It’s discrimination against people who are prepared to suffer the loss of basic dignities, sorry amenities, in order to get a cheaper ticket.

It’s cheap flights for people who are prepared to put up with being the lowest class passengers on the plane.

I love this Tweet exchange between Colby and @united because United get schooled:

United claims that they do by citing their Economy fare policy.

Colby takes a screenshot of their ticket priced and shows that Economy costs $70 more than Basic Economy hence the carry on isn’t free!

You see it’s not really free if you need to pay extra to get it!

Cmon everyone knows this. How dumb do you think we are?

United are happy to take bailout money when they are int trouble but Deimos still can’t bring his carry-on.

Amanda knows her personal item bag is the right size.

So she objects to being made to wait around:

On a United Basic Economy fare you need to pay extra if you want to choose your seat.

This seems incredible to Seth:

As far as Seth is concerned sitting next to your family on a flight is something that should be included on all fares.

It’s a basic dignity not a basic amenity.

Timm’s Wife Was Separated From Her Meds

MissKpop Felt Looked Down Upon

When MissKpop flew with United as a Basic Economy passenger she felt she was treated like a second class citizen.

Actually, Basic is more like the 4th class of passenger.

Ray said he had a seat that couldn’t recline and was set up in a way that hurt his neck badly.

Because he was on the cheapest class of ticket he wasn’t able to move to another seat.

The No Online Check-In Mystery

Merlin repeatedly asks United why they do this.

And United dodge the question time and time again.

Why Are They All So Annoyed?

So United need to find a way to deliberately inconvenience you so that you might pony up some extra dollars.

That’s a step too far. This is no longer about withholding luxuries, it’s about pissing you off so you’ll pay the money you thought you were going to save.

And this is the problem with United’s basic economy.

They are not just doing away with luxuries.

They are not even withholding “basic amenities”.

They are deliberately introducing annoyances, and that’s a step too far.

Jennifer Found It Hard To Find An Agent

This is a great example of United’s trap in action:

Jennifer is clearly someone that knows the personal item bag needs to be under 17 x 10 x 9 inches.

She is not bringing a checked bag.

United deliberately inconvenience her by making her check-in at the desk.

There is no United staff available to help her check in and get her boarding pass.

With the line at the check-in desk too long Jennifer succumbs and pays the extra $30 to check a bag at the self-service kiosk that she doesn’t want to check.

United understand’s where she is coming from. They are sympathetic to her plight.

But in truth they don’t value Jennifer’s time. They value her dollars.

And that’s why they maintain their perverse policies.

To be fair to United happy customers don’t go on social media to talk about positive experiences.

By and large, any United Basic Economy Review you read on Twitter is likely to be negative simply because Twitter is where people go to rant.

Many customers fly on United Basic Economy tickets and only some of them have negative experiences.

Hopefully you’ve read this post before you book a Basic Economy class ticket.

That way you’ll know what’s basic about Basic Economy and can better decide if it’s the right fare class for you.

United, when you have a cookie cutter apology that you copy and paste regularly maybe it’s time to start asking…

There is nothing worse than an apology that isn’t meant.

So United. Say it like you mean it or don’t say it at all.