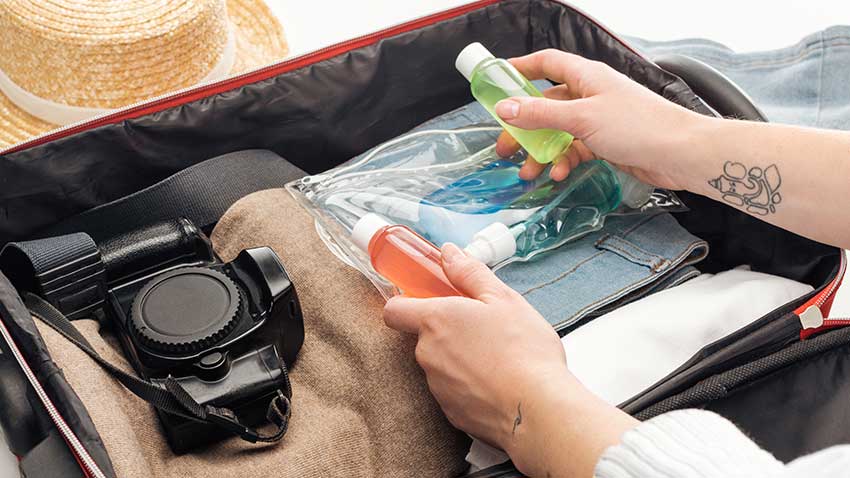 There are actually three TSA liquid limits for fluids, gels, pastes, and creams packed in your carry-on bag.

These liquid limits are enforced by the TSA when going through airport security.

Liquids that you buy after the airport security checkpoint can be brought onto the plane without restrictions.

Let’s look at the checkpoint guidelines and the three limits.

Transportation Security Administration’s official website outlines its liquid rules, but they don’t do a very good job of explaining why the liquids limits are in place.

The contents of your carry-on bag will be scanned by the x-ray machine. Crucially, the TSA cannot identify from the scanner whether liquids really are what they say they are on the label.

The x-ray scanners can detect weapons, but they can’t detect flammable liquids.

Any passenger’s liquids could be explosives in disguise. This is why they are a security threat and why the TSA liquid limits exist. They want to make sure nobody is bringing a lot of liquids on the plane, just in case.

Here are the three liquid limits that the TSA imposes.

You must carry liquids, gels, and aerosols in a travel-size container.

Travel-size means bottles that are 3.4 oz or less. If you are thinking 3.4 ounce is a strange number it’s exactly 100 ml and that is the standard maximum size of carry-on liquids around the world.

It is the size of container that is important, not the amount of liquid in the the containers. So half empty tubes of toothpaste don’t qualify.

If you exceed the liquid limit TSA will confiscate it and throw it in the trash. Although, the TSA prefers to say you “voluntarily surrender” the liquid since you could, in theory, choose not to fly.

All your travel-size bottles must be packed in a one quart sized bag.

There are 32 ounces in a quart, but you won’t be able to pack 32 ounces of liquids in your hand luggage. The shape of the bottles makes it awkward to pack a Ziploc baggie to the maximum.

The total liquids limit for the TSA is probably around 25 ounces. That would be 7 or 8 travel-size bottles packed in a quart-size plastic baggie.

The TSA says a 6 x 9 inches Ziploc bag is quart-sized, but there are other bag shapes that are suitable.

Go ahead and adjust the dimensions of the ziploc bag to find out if it's quart-sized and TSA approved.

You could also buy a reusable “quart size” bag from amazon. Most of them are actually larger than one quart but everyone seems to be getting away with it.

TSA Liquid Limit 3 – Only One Quart Bag Per Passenger

The 3-1-1 TSA rules only permit one plastic quart bag per passenger, that’s another limit, it’s not one bag per carry-on suitcase. So you can’t get around the TSA liquid limits by bringing more than one carry-on.

We can now see why it’s called The 3-1-1 Liquids Rule. There are 3 TSA liquids limits.

What does the TSA consider to be a liquid?

The TSA often says “If you can squeeze it, smear it, pump it, spread it, spray it, or spill it then it’s considered a liquid”.

That means that some items that you might not think are liquids are considered to be liquids by the TSA security officers.

A lot of travelers are caught out by spreads, creams, and gels. In the mind of the average person, something that doesn’t pour isn’t a liquid, but that’s not how the TSA defines it.

It can also matter whether the liquid is “flying solo” or is part of something.

For example, liquid food fillings that are part of solid food don’t count as liquids.

And remember this from science class, frozen liquids become solids.

That’s true at the airport security checkpoint too.

Liquids that are restricted at room temperature become unrestricted if they are frozen solid. That means if a liquid is frozen the 3.4 oz limit does not apply. The challenge is getting the liquid to the airport while it is still frozen solid. The TSA will refuse to let it past if it is beginning to melt. Ice packs, coolers, and perhaps dry ice could help.

Some items that passengers get caught out by are gel packs, canned foods, snow globes, bug spray, and sunscreen.

Liquids That Are Never Allowed Through Security

There are some liquids that are never permitted on the plane even in travel-size bottles.

You cannot bring hazardous materials (Hazmat) flammable liquids on to the plane even in quantities smaller than 3.4 oz.

Only travel-size aerosols that are toiletries are permitted in hand luggage. The definition of a toiletry is something that is sprayed on your skin. So aerosol deodorant is permitted, but aerosol air freshener is not.

Exemption To The TSA Liquids Limit

There are some liquids permitted in carry-on baggage in containers larger than 3.4 ounces

Feel free to bring water, juice, or soup for an infant.

You also don’t need to worry about breast milk or baby formula.

You simply put these items in a separate bin at for screening at the checkpoint.

When a child is able to walk through airport security unassisted by an adult they are no longer considered an infant and the exemption ceases to apply.

You can also pack reasonable quantities of medically necessary liquids in carry-on bags in containers larger than 3.4 oz.

Additional screening is required so place these liquids in a separate bin at the checkpoint.

You don’t need any documentation from your doctor.

Duty free liquids that you have purchased after the checkpoint can be brought on to the plane.

If you have a connecting flight you should be able to bring the alcohol through the security checkpoint if it is in tamper evident bags.

Most toiletries that are limited in carry-ons are unlimited in checked bags.

The amount of shampoo, shower gel, and sun cream you pack in your checked bag is up to you.

Aerosols and flammable liquids still need special attention, as there are additional rules for these products.

Liquor that is above 24% ABV but less than 70% ABV is restricted to 5 liters maximum because it’s somewhat flammable. Liquor over 70% ABV is banned in both carry-on and checked luggage.

Take It To The Limit… One More Time

According to the Transportation Security Administration, liquids, gels, and aerosols packed in hand luggage can only be 3.4 ounces or less when going through the airport security checkpoint.

You must pack all your liquids in one quart-size bag.

You can only have one bag per passenger.