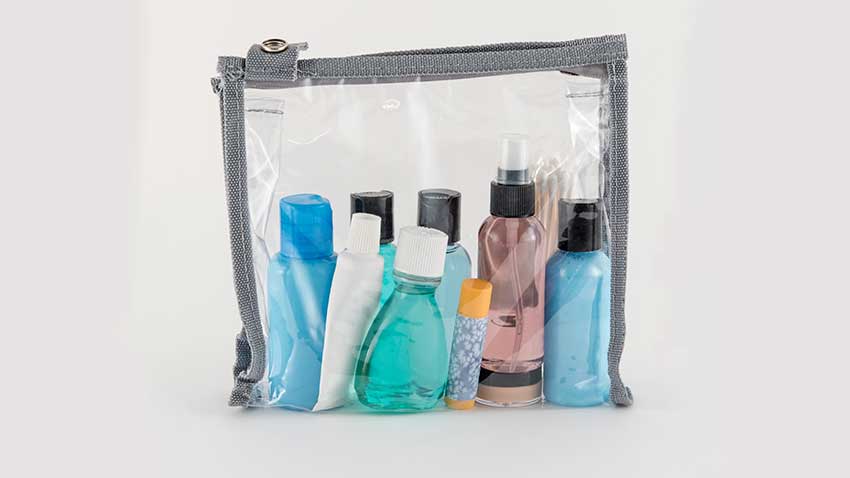 As you are aware there are restrictions on how many ounces of liquid you can carry on a plane.

When you travel you need to know the TSA liquids rules before you go through the TSA’s security screening.

If your bottles are over the liquids limit you won’t be able to take them and they’ll end up in the trash.

The guidelines on this post refer to the liquids permitted in carry-on luggage. Travelers taking liquids in checked bags should refer to this post.

When Flying, How Many Fluid Ounces Can 1 Bottle Contain?

The first part of the TSA’s 3-1-1 rule states that each bottle or container of liquid that you bring in your carry on luggage can be no larger than 3.4 ounces.

If that seems like a strange number to you it’s because 3.4 ounces is equivalent to 100 milliliters. This brings the US airplane liquids limit in line with the rest of the metric world.

Many products such as shampoo, shower gel, etc are available in travel size bottles that are under this 3.4 oz limit.

You can also buy refillable travel bottles and decant some liquid from your larger bottles of shampoo into the smaller bottles.

This can be a real money saver in the long run and there is another advantage of refilling bottles too.

Often 3.4 oz is too much liquid for the duration of your trip. For example, a 50 ml bottle of face moisturizer might last 4 months.

So 3.4 oz of face moisturizer would be enough to last 8 months, so that’s overkill when you are only going away for a weekend vacation.

Refillable bottles and containers come in all shapes and sizes and this means you can take enough product to cover you for the duration of your trip.

And all this matters because you are not allowed to bring unlimited 3.4 oz bottles on a plane.

There is a maximum limit to the total number of fl oz you can pack in your carry on and that’s defined by your plastic toiletries bag.

How Many Ounces Of Liquid Can You Take On A Plane In Total?

The second part of the 3-1-1 rule states that all your liquids bottles or container most be packed inside 1 quart-sized plastic bag.

The last part of the 3-1-1 rule states that you are only permitted 1 quart-bag per passenger. So you can’t pack 1 quart-bag full of toiletries in your purse and another quart bag in your carry-on bag.

There are some liquids, gels, creams, and pastes that people often forget to pack in their toiletries bag.

If you can squeeze it, smear it, pump it, spread it, spray it, or spill it then it’s considered a liquid. So make sure you pack it in your quart bag.

The following is a brief list of some of the frequent offenders:

What Types Of Liquids Are Banned Entirely?

A few liquids are banned entirely even if they are under 3.4 oz.

The reason these are banned is for safety. The TSA is trying to stop dangerous substances from getting on planes.

Exceptions Where You Are Permitted To Bring More Ounces

Liquids are not restricted just to annoy you.

The TSA has no interest in stopping you from taking necessary liquids when you fly. It’s all about safety at the end of the day.

So there are some exceptions to the 3-1-1 rule where you are able to bring quantities of liquids greater than 3.4 oz.

Here are some examples:

If you are taking any of these exceptions with you then you should remove them from your carry-on bags at the checkpoint for additional screening.

Duty-free liquids that you’ve purchased after the security checkpoint can be greater than 3.4.

You can also carry that bottle of water or soda that you bought from the store after the security checkpoint.

These were the rules for packing carry-on luggage. Passengers traveling with checked baggage will be able to take more liquids.

However still some rules on flying with liquids in checked luggage especially flammable liquids.