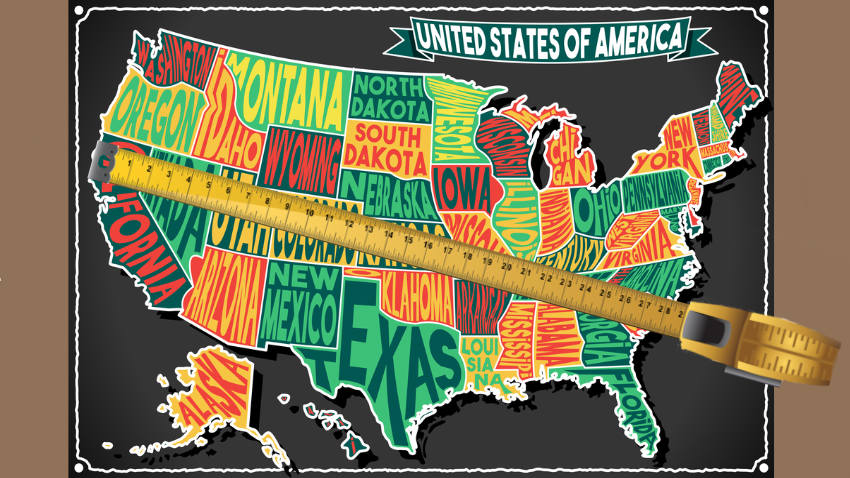 We’ll ignore Hawaii which is another 2,286 miles east of San Francisco across the ocean. And we’ll ignore Alaska too. This post is about the continental coast to coast road trip.

Of course the exact number of miles from coast to coast in the USA depends on which route you take.

The distance measured varies if you change your starting point or end point.

Let’s first look at some approximate distances. Then we’ll give you more exact information for different popular cross country routes and how long it takes to drive across America using these routes.

If we want to find the shortest distance from the east coast to the west coast then Florida is considered an east coast state. It’s only 1763 miles from the coast at Pensacola, Florida to San Diego.

That’s cheating a bit since Pensacola is situated on the southern Gulf of Mexico coast rather than the Atlantic coast.

It’s 2090 miles between San Diego on the Pacific east coast and Jacksonville on the Atlantic west coast.

These are straight line distances. If you are traveling by car the routes will be a little longer.

For example there are 2445 miles between Los Angeles and New York City as the crow flies, but driving the route takes you off the straight line so there are 2790 road miles and it takes 41 hours.

How Many Miles To Drive Across The US?

So exactly how many miles you’ll travel depends on your starting point, your destination, and your route. The range is between approximately 2,500 to 3,000 miles to drive across the US.

How Long Does It Take To Drive Across The US?

To cross the US takes about a between 35 and 45 hours driving time. That would be about 5 or 6 days driving 8 hours per day.

The United States is 3045 miles from the east coast to the west coast if you take the northern route.

Interstate 90 will take you from Boston to Seattle.

You’ll go cross the great plains in Montana and go over the rocky mountains.

It would take 45 hours to drive across America using this route. That’s a 6 day trip if you drive 7 and a half hours per day.

Pacific Beach State Park is a further 135 miles east of Seattle if you don’t consider Seattle to be the coast.

If you want to start further east than Boston then you can begin in Houston, Maine and that will add a further 353 miles.

The northern route is a great road trip if you don’t like hot temperatures.

Consider taking a detour to Yellowstone National Park in Wyoming if you have the time!

Interstate 80 will take you coast to coast from San Francisco to Teaneck, New Jersey.

Using this route the US is 2899 miles from coast to coast. It will take you 43 hours to cross America on the I80.

The length of the United States is 2430 miles if you take the southern route.

You’ll travel on Interstate 10 from Santa Monica to Jacksonville, Florida.

The I10 passes through Arizona, New Mexico, Texas, Louisiana, Mississippi and Alabama.

Interstate 40 runs from for 2490 miles from Barstow, California to North Carolina.

From Barstow it’s another 129 miles to the eastern coast. In total it’s 2685 miles to drive coast to coast using the interstate 40.

Crossing the US on the I-40 puts you within driving distance of the Grand Canyon, which can be worth a detour.

Highway 50 (US 50) stretches from West Sacramento, California to Ocean City, Maryland, on the Atlantic Ocean.

To cross the USA using this route would be 2871 miles. It would take 43 hours to drive.

The section in Nevada is known as ‘The Loneliest Road In America’.