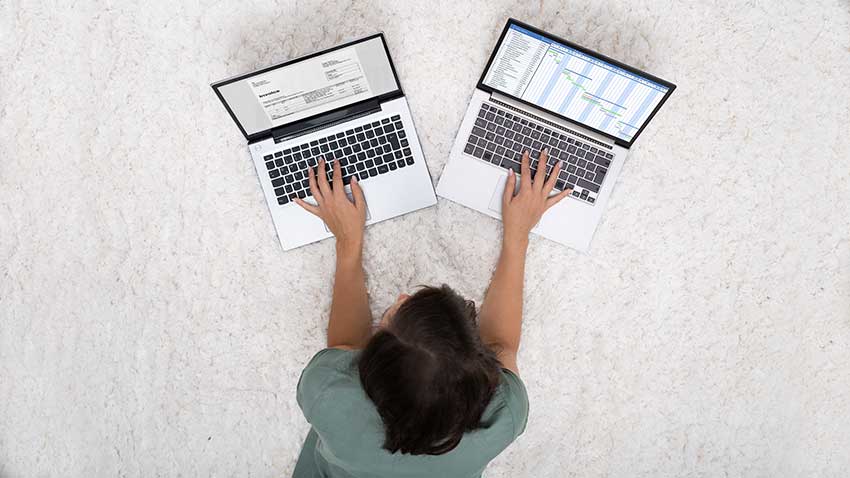 A lot of travelers wish to fly with two laptops, one for work and one for personal use.

You might also be traveling internationally and have the opportunity to buy a laptop at a cheaper price.

But can you bring two laptops on a plane? What are the regulations?

The Transportation Security Administration run the security checkpoint at the airport. If anyone is going to stop you bringing multiple laptops on to planes it’s these guys.

Here’s a screenshot from their website about laptops. Notice they are talking about packing laptops plural. If you could only bring one laptop this would be the place to let you know.

Just to be sure I’ve giving you the right information I checked on Twitter to see if anyone was asking the TSA how many laptops they could bring in their hand luggage.

According to the TSA, “Multiple laptops are allowed through the security checkpoint.” But they suggest the airline you choose to fly with might have a limit.

The same passenger then checked with American Airlines to see if they permitted two laptops.

At first American Airlines answer that you can bring “two portable electronic devices” on a flight.

The traveler pushes a little further to get a specific answer because a cell phone and tablet could also be considered a portable electronic device.

And AA come back and say that it’s not a problem for them to bring two laptops, a tablet, and a phone on their flights.

Other airlines might have different policies regarding how many portable electronic devices you can pack in your can luggage.

Here’s the thing. It’s the TSA that screen your luggage. The airlines don’t look inside your suitcase, so even if they have a policy that limits the number of laptops you can fly with how will they know?

Paul checked with Delta that bringing multiple laptops would be permitted. One laptop for work and one for personal use.

Delta replied that “you can have more than one laptop computer in your carry-on”.

If you are a stickler for the rules then you should contact your airline and ask if they have a limit on how many laptops you can fly with.

Many modern laptops are thin and lightweight. Perhaps any limits are a hangover from when a laptop used to weigh a lot.

In most cases, airlines are only concerned about the size or weight of your baggage. They don’t ask questions about what is packed inside your suitcase. That’s the job of the TSA.

If you are bringing laptops when you fly it’s always best to pack them in carry-on luggage rather than checked luggage.

Valuables can occasionally be stolen from checked bags and high-value items like laptops are at risk. There is always the risk that your laptop could be damaged in checked baggage too. It’s best to keep laptops in hand luggage where you can keep an eye on them.

The other department that is interested in what you have inside your suitcase is customs.

If you are flying internationally you can bring personal electronic devices for personal use.

But if you had a carry-on stuffed full of many laptops then this would be seen as importing/exporting and there might be tax to pay.

If I were bringing three or more laptops on an international flight I’d check the importing rules of my destination country.

You don’t need to worry about customs for domestic flights in the USA.

Lastly, if flying on foreign airlines be careful about carry-on luggage weight limits especially in Asia. Bringing multiple laptops might cause your hand luggage to become overweight.

Some 15-inch MacBook Pros that were sold between September 2015 and February 2017 are banned from planes by the FAA.

In these models there is a chance the battery will overheat and cause a fire.

You can bring two laptops in your carry-on. In fact the TSA don’t mind how many laptops you bring in your luggage.

When you reach the security checkpoint take any personal electronics larger than a cell phone out of your bag and place each of them in a separate tray for screening.