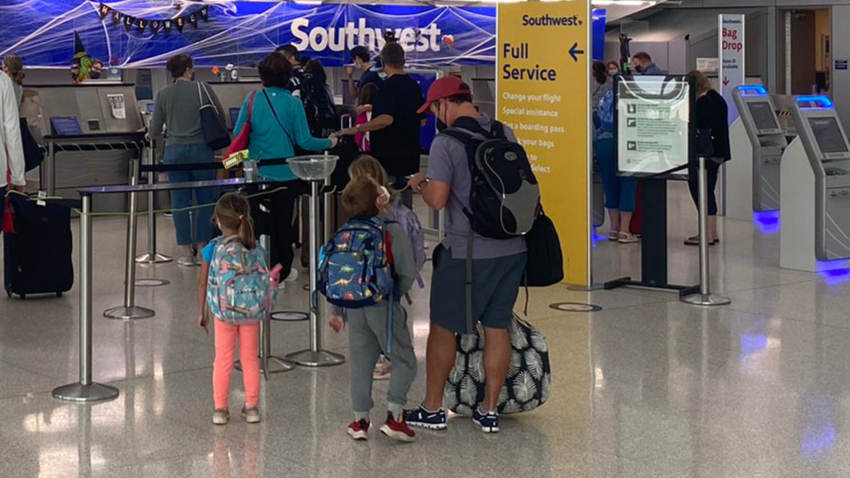 To understand how many carry ons are allowed on Southwest you need to understand the difference between ‘the carry-on bag’ and that other bag you carry on to the plane ‘the personal item’.

Southwest allows you to carry two bags on to the plane, but only one of them is called ‘the carry-on’. The second bag that you can carry-on is called ‘the personal item’.

Calling it the personal item and giving examples like purse, briefcase, or laptop bag makes it sound small and almost insignificant as a place to pack your clothes.

But the personal item allowance for Southwest is larger than you might think! It’s almost a second carry-on bag although it isn’t given that label.

The Number & Size Of Items Can You Carry On At Southwest

Your main carry-on size limit for Southwest is larger than normal. Southwest allows one carry-on bag that can have maximum dimensions of 10 x 16 x 24 inches.

A bag that size would have a capacity of almost 63 liters. But unless you went out your way to find a large carry-on bag that you could only use on Southwest then you’ll probably be flying with the carry-on you already own. And that carry-on will probably be significantly smaller than the Southwest Airlines limit so that it works with other airlines.

So let’s now look at the size of the Southwest Airlines personal item.

A bag that size would be 2123 cubic inches or almost 35 liters. The suitcase you already own is probably around 40 liters and you can carry on a second personal item bag on to a Southwest flight that can be as large as 35 liters.

Although it’s not called a second ‘carry-on’ the Southwest personal item allowance provides a lot of additional packing space if you need it.

But you’ll need to own something the correct size to make use of the Southwest personal item allowance.

Finding A Good Bag To Use As A Southwest Personal Item

Each of those dimensions is within half an inch of the Southwest published size limit. Knowing how Southwest operate I wouldn’t worry about being half an inch over size.

However, it might be that a soft duffle bag like this one is the best way to go. It will allow you to take the most amount of clothes using the personal item allowance. Since it’s squeezable there won’t be any problems with this size.

Don’t worry that it doesn’t have wheels. Duffel bags like this can be attached to the top of your carry-on like this:

Just remember that if you do take a large ‘almost carry-on sized’ bag like this as your personal item then your purse or handbag will need to be packed inside the bag when going past the gate agent.

You can only carry on 2 bags at Southwest, not 3.

The Southwest Personal Item Can Be Stored Under The Seat

Southwest Airlines has an open seating policy. That means they don’t assign seats and you can sit wherever you like.

If you are bringing a large personal item then you might want to pay extra for priority boarding and try to grab yourself a window seat.

Southwest Airlines usually operates Boeing 737 planes and this photo shows you the typical under seat space for a Boeing plane.

As you can see the window and middle seats tend to have more space under them. The aisle seat isn’t great for storing a large bag.

But I don’t think you need to stow your personal item under the seat.

Southwest policy threatens that if your personal item does not fit under the seat then you might need to stow it in the overhead bin.

That’s probably where you want to stow it anyway if you are trying to max out the Southwest personal item allowance.

Officially you are only allowed one carry-on bag on a Southwest Airlines flight.

However the personal item allowance is almost as big as a carry-on.

If you get on the flight early and the flight isn’t too busy then you’ll be able to put both your bags in the overhead bin.

If you want to bring more luggage on a Southwest Airlines flight you have three options.

Firstly, you can go out and buy a new carry-on that can be up to 24 x 16 x 10 inches. That could be 50% larger than the carry-on that you already own. The problem is that 24 inch carry-on luggage is a bad idea since it’s only accepted on Southwest Airlines flights.

The second option that will get you even more extra space is to carry-on a second large personal item bag.

Lastly, since Southwest doesn’t charge for checked baggage then you might want to bring a checked bag. The downside is that you’ll need to wait at the baggage claim carousel to collect it after you land and keep your fingers crossed that it won’t get lost.

And there is nothing to stop you doing using all three options if you like to fly with your entire closet you can take a huge carry-on, massive personal item, and you can check a free bag too!