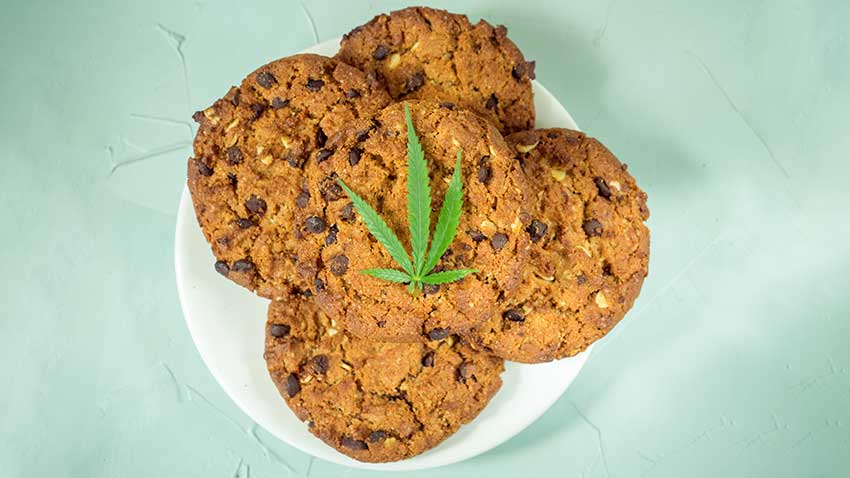 To be clear from the start “edibles” in this article refers to food products infused with marijuana. These can be either home-made or commercially purchased, it’s no longer only brownies and space cakes.

If you are wondering about regular food like candy, chocolate, and snacks we have posted on these topics elsewhere.

So, now that we’ve cleared that up, can you take edibles on a plane? Let’s dive in and find out.

The role of the transportation security administration is to stop dangerous items from getting inside airplane cabins. When they scan carry-on bags they are mainly searching for liquids (that could be flammable) and weapons that could be used on the plane.

The TSA doesn’t have any rules that refer directly to edibles, but there are some rules and procedures that are important to know about regarding flying with edibles.

First, let’s hear from the @AskTSA service on Twiter as they answer Oregone about marijuana edibles:

While we have no regulations on possessing or transporting marijuana possession is a crime under federal law. Our officers are not looking for illegal narcotics, but we have to report them when discovered.

All travelers must comply with federal law on transporting marijuana and cannabis-infused products on board a flight. Officers are required to notify law enforcement officers if they discover these products while screening your property.

So while the TSA employs a bunch of serious-looking people they are looking for persons with malevolent intent, not stoners.

TSA’s screening procedures are focused on security and are designed to detect potential threats to aviation and passengers. Accordingly, TSA security officers do not search for marijuana or other illegal drugs, but if any illegal substance is discovered during security screening, TSA will refer the matter to a local law enforcement officer.

There are many blogs or forums around that will try to persuade you that “you’ll be fine” or “the TSA doesn’t care about weed”. The simple truth is if you fly with edibles you are committing a federal crime and you may end up dealing with a police officer.

So can you bring edibles on a plane? The answer is no, not legally. You risk getting into trouble if the TSA accidently find your stash.

This is true even if you are not crossing state lines. It is true even you are flying between legalized states. Once you have passed the security checkpoint federal law applies and possession of edibles is a crime.

How To Get Edibles Through Airport Security

So, you now know that bringing edibles in checked luggage or carry-on luggage is a federal crime.

But you are intent on bringing edibles on a plane anyway.

How do you hide edibles on a plane?

One important thing to realize is that some foods are treated as liquids and hence must be packed inside your clear quart-size liquids bag.

Any item that you can pump, squeeze, spread, smear, spray or spill must follow our liquids rule in carry-on bags.

You want to make sure your edibles are solid so that they don’t attract attention for not being packed in the toiletries bag. So no cannabis-infused peanut butter because peanut butter is treated as a liquid.

People take food on planes frequently and are permitted to do so. It will be difficult for anyone to tell that your cannabis edible chocolate bar is any different from a regular chocolate bar.

If you are going to do it make sure you are extremely familiar with all the carry on regulations. If you have something in your hand luggage that shows up on a scan then your bag will be searched increasing the likelihood that your edibles will be accidently discovered.

Lynn had a nice relaxing flight…

Flying with edibles is just going to create stress. You will be much better off buying them at your destination.

Okay… it would be better to put edibles in carry-on luggage rather than checked luggage since all checked luggage is scanned and around 10% of checked bags are searched.

Don’t fly with edibles in packaging that indicates that the food contains marijuana. Perhaps even disguise your edible in a more familiar brand’s packaging.

Obviously, don’t travel with an edible that gives off a strong smell of weed. And don’t walk through security wearing a t-shirt like this:

Also, keep in mind that when you go on a plane you are about to fly in the sky. In the event of an emergency landing, you’ll need to get to the exits quickly to attempt to save your life. It’s probably best not to try doing that wasted. Just saying…

Well done to Bob for making the flight he was worried about more dangerous by flying stoned. People tell me chain saws are dangerous but I find after a few beers they are not so scary ))

Listen, it’s probably not what you want to hear but it’s the truth, and the same applies to being drunk on a plane.

What happens if the TSA finds edibles in checked luggage?

If you are lucky the TSA officer might just ignore it. Maybe he or she is sympathetic to the cause and personally doesn’t have a problem.

Or you might get a stickler for the rules who will contact the local police and they will deal with you.

It’s not worth risking missing a flight for a few cookies, and if you are taking more than a few cookies the local police might not be so lenient with you.

As far as marijuana, TSA doesn’t have any regulations that address the possession or transportation of marijuana and cannabis infused products, but under Federal law and many State laws, it’s a crime to possess or transport any detectable amount of marijuana. Having a State-issued cannabis card or other documentation indicating that the marijuana is for medical purposes doesn’t exempt you from TSA’s requirement to notify local law enforcement. It’s up to the responding officer, not TSA, to determine if possession of the marijuana is authorized under State law, or whether to make an arrest or confiscate it.

Lots of people do it and get away with it.

While there are other blogs out there that will tell you “it’ll all be fine, don’t worry” it’s your ass that’s on the line, not theirs.

Yes, you can take edibles on the plane but you might end up crapping your pants, dealing with the police, and missing your flight.

Overall it’s probably not worth it.