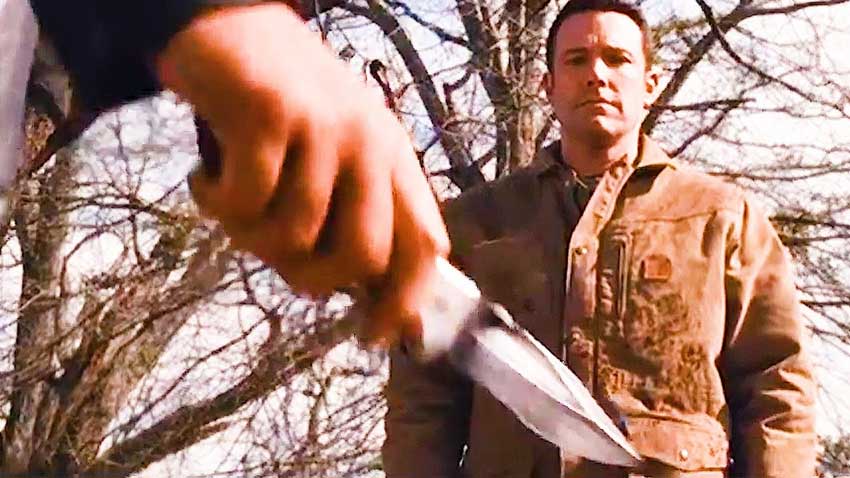 In the movie The Accountant there is a scene where Ben Affleck fights a knife-wielding thug using just the leather belt that had been holding up his pants.

The humble leather belt, as it turns out, is quite the deadly weapon.

While the TSA tries to stop all dangerous items from getting into the aircraft cabin they’ve obviously not seen the movie and they don’t consider a leather belt to be a weapon.

But there are sometimes issues around wearing belts through airport security. Let’s take a look at the reasons why and what you can do about it.

The Transportation Security Administration doesn’t have a specific rule written on their website about removing belts when going through airport security.

However, when you reach the security line you might find TSA agents yelling at everyone to remove their belts and to place them in a screening bin.

The reason for this is simple.

Many belts have a metal buckle that can set off the alarm as you walk through the metal detector. By removing your belt you will be less likely to trigger the body scanner alarm.

This also means that you’ll be less likely to undergo an uncomfortable pat-down screening. If you trigger the alarm they’ll want to do a physical body search.

This passenger asked on Twitter about which items need to be placed into bins at security screening.

The TSA replied, “you’ll also need to remove your shoes, belt, light jacket and place them in your carry-on bags for x-ray screening”.

So the sensible thing to do is to take off your belt before you even reach the security line and pack it in your carry-on bag or personal item bag.

Not All Belts Will Set Off The Metal Detectors

The airport scanners that you walk through detect magnetic metals. Expensive metals like gold are not very magnetic and that’s why you can wear good jewelry through the security checkpoint.

Belt buckles are often made with cheaper magnetic metal, some aren’t though and they wouldn’t trigger the alarm.

And if a TSA officer sees you wearing a belt they don’t want to get into a debate about it, they’ll just ask you to take it off.

Bryan got into a debate with the TSA agent about his titanium belt buckle:

The TSA can’t tell from glancing at your belt if it’s going to trigger the alarm or not. So if they see a belt they will ask you to remove it.

To keep things moving along they’d prefer it if all passengers removed belts and placed them in their carry-on bags well before they even reach the checkpoint.

That’s why even though David mentioned that his belt has no metal parts the TSA still recommended that he took it off when going through airport security.

So while you can buy an airport security friendly belt with a carbon fibre belt buckle the security team don’t know that it’s not magnetic. They just see the belt and they ask you to take it off. They don’t want to hold up the line to save you the hassle of removing your belt.

Something like this “Beep Free” airport friendly belt that won’t set off metal detector could be handy, but if you are going to wear a belt like this I’d suggest pulling out your shirt so that the TSA agent doesn’t see it.

Rather than buying a new belt just for airport security how about putting that money towards TSA PreCheck.

One of the perks of signing up for TSA PreCheck is that you shouldn’t need to remove your belt when going through the screening machine.

So if it really annoys you having to take your belt off then you can pay to make the problem go away.

PreCheck approved travelers should also be able to keep a light jacket on, keep a hoodie on, keep a laptop in their bag, and keep their liquids in their carry on.

Even as a PreCheck customer if your belt sets off the alarm then you’ll need to take it off and put it through the x-ray scanner.

It happened to Ken and he wasn’t happy about it!

What belt doesn’t set off a metal detector!

Well, if you are reading Ken…

TSA PreCheck in combination with an airport friendly belt might be the best solution for belt wearing frequent travelers.

Since you are supposed to be able to wear the belt you won’t need to hide it. And since it’s not got a metal buckle it won’t trigger the alarm.

But nothing is certain. The TSA try to shake things up a little and might still ask you to remove your belt occasionally. Just to keep you on your toes.

Chris thought that it’s because the TSA deem his leather belt to be a threat to national security:

I think he’s been watching that Ben Affleck movie. It’s not about your belt being a weapon Chris…

It’s about not setting off the metal detectors and slowing down the line.

Michelle asked if she’d be able to bring this weightlifting belt on the plane in carry-on luggage.

And the TSA replied that it was fine. Belts are not banned from hand luggage.

Can you wear a money belt through airport security?

In principle you could wear a money belt that doesn’t use any magnetic metals. But it’s not a great idea.

The TSA don’t like you to have anything concealed on your body when going through the airport scanners. It’s suspicious to them.

Remember those scanners detect metals. That’s fine for catching anything trying to bring a knife on the plane, but what if anyone had concealed flammable liquids somewhere on their body.

The TSA doesn’t even like you to be wearing any baggy clothes. They want you to have tight fitting clothes so they can see nothing is concealed. They don’t do it to annoy you. They do it to keep you safe.

Sarina was traveling with a money belt and had to take it off and put it through the x-ray machines.

Amazingly, $20 more than was even in the money belt was stolen while it was out of sight at the checkpoint. I think Sarina needs an Accountant to help her with the numbers and I know just the guy…

It’s probably best not to travel with large quantities of cash at all, but if you are flying with cash I’d recommend packing it in your carry-on bag when going through the checkpoint.

A bulging wallet, or money belt, sitting alone in a screening bin might just get swiped by someone.

If the TSA agents see you wearing a belt they’ll probably ask you to take it off.

You can buy some belts that don’t set off metal detectors but the TSA can’t tell by glancing at a belt if it’s magnetic or not.

TSA PreCheck in combination with an airport friendly belt might be the solution if you travel a lot and hate taking off your belt at security screening.

Lastly, here’s that belt fight scene from The Accountant in case you want to watch it!