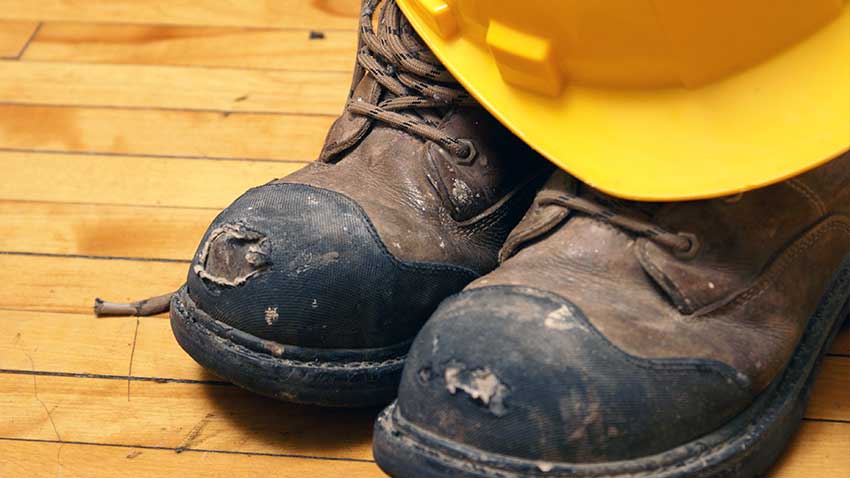 Work boots take up a lot of room in your carry on bag. You could potentially save space by wearing them while you fly.

But steel toe capped work boots have in the past been deemed to be a deadly weapon in the eyes of the law.

So can you fly while wearing steel-toe boots? Does the TSA consider steel-capped shoes to be a weapon and prohibit wearing them on a plane?

Let’s take a look at the rules.

The Transportation Security Administration are in charge of what can and can’t be taken through the security checkpoint and brought on to airplanes.

This is what they had to say on their website about bringing steel toe boots with you when you travel.

You can pack steel toe capped safety boots in carry on luggage or in checked bags.

I had to look elsewhere to find out if you can actually wear steel toe boots on a plane.

This traveler asked the TSA directly on Twitter if they could wear their steel toe boots on the plane. The TSA replied, “yes, you can”. But you’ll need to take them off and put them in a tray when you are at the x-ray conveyor belt.

And they also told this traveler the same thing.

Passengers usually need to take their shoes off when going through airport security unless they are a member of the TSA PreCheck trusted traveler scheme.

If you are a TSA PreCheck traveler you can, in theory, keep your boots on when going through the metal detector.

However, a steel toe boot is likely to set off the alarm.

Ivan was a little bit annoyed because he paid for PreCheck to keep his shoes on but his alloy toe caps trigger the metal detector alarm and he ends up needing to take his boots off!

The reason small jewelry items don’t set off the alarm but large metal objects do is because the metals in fine jewelry are not magnetic.

The TSA told Randell he could keep his steel toe shoes on through the checkpoint because he has PreCheck.

Steel toe boots are allowed on airplanes but even if you have TSA PreCheck you’ll probably end up needing to take them off if they set off the metal detector.

There is no such thing as TSA approved shoes and non-approved shoes. The general rule is that all boots and shoes are allowed on planes.

However, the TSA officer on the ground always makes the final decision. If your boots were clearly designed to be weapons then you be better not to wear them on the airplane and to pack them in your checked luggage.

That’s it have a nice trip!