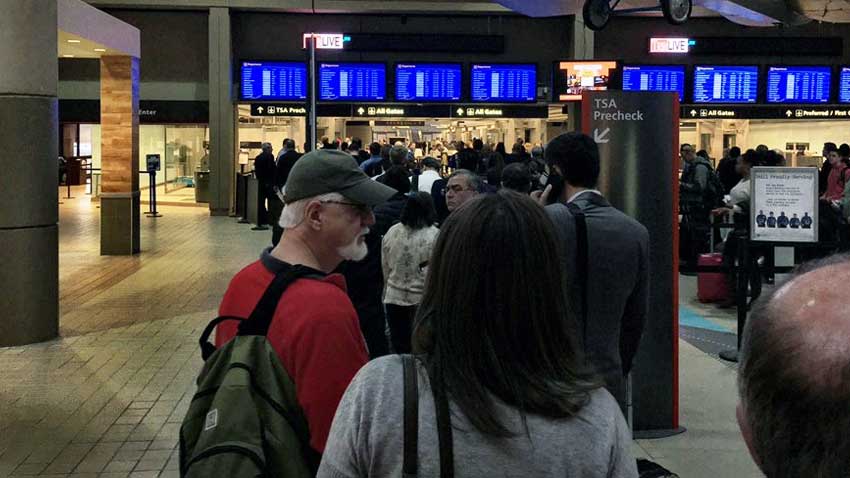 It used to be considered rude or disrespectful to wear a hat indoors.

I’m not a superstitious person, but I wouldn’t wear a hat on a plane just in case. I don’t want to be asking for bad luck when I’m 6 miles up in the sky!

This is post is about bringing hats through airport security and the TSA rules about traveling with hats.

But hats are treated as any other item of clothing and you are permitted to pack hats in carry-on luggage or in checked luggage.

But what about wearing a hat while going through the airport security checkpoint?

Do you need to remove your hat and put it through the x-ray machine?

I asked the TSA on Twitter to try to get an answer.

The TSA asked me to remove my hat and place it in a bin to go through the x-ray machine.

When Hakeem asked if he could keep wearing his cap through security the reply was slightly different.

In this case, the TSA strongly recommended Hakeem take off his cap. Taking his cap off would reduce the need for additional screening.

The TSA needs to make sure that passengers don’t have anything concealed under a hat.

By using the x-ray scanner the TSA can get a good look at your luggage. But the walk-through metal detector only detects metal.

Anyone hiding flammable liquids underneath a hat wouldn’t trigger the metal detector alarm.

There are many types of religious headwear such as hijabs, turbans that wearers may not wish to remove. The TSA will accommodate certain headwear by performing a pat-down screening.

You could claim that your baseball cap is religious headwear and insist on a pat-down search. I think if you kicked up a fuss about it the TSA would let you keep a cap, beanie, or other hat on and try to inspect it by doing a physical pat down.

But if you’ve not got a real reason to keep it on it’s much better for everyone if you take your hat off and place it in a bin when going through airport security checkpoint.

This helps the TSA to make sure nobody is bringing any dangerous items onto the plane. The screening process can be annoying at times but it’s there for the safety of all passengers.

You potentially can wear a hat through airport security if you insist and/or claim that you wear the hat for religious reasons.

Can You Wear a Hat Through TSA Precheck?

Don tried to wear his baseball cap through the metal detector when he was in the TSA Precheck line.

But the TSA agent asked him to remove his hat.

The TSA replied that the TSA officers have the discretion to ask passengers to remove hats even in the TSA Precheck lane.

Because TSA Precheck passengers are screened before they even arrive at the airport you might be able to keep a hat on while going through the checkpoint in the Precheck lane.

You can often keep wearing your jacket, hoodie, or hat, if you are Precheck approved but it’s not guaranteed.

Even in TSA Precheck you can be asked to remove your hat. This is part of the TSA’s “unpredictable security measures”.

If you have any more questions about wearing hats at the security checkpoint you can reach out to the TSA on Twitter.

Camilo asked if his hat pin could be permitted through the checkpoint:

And the TSA replied, “Hat pins are allowed through checkpoint security”.

But there are limits, if you could potentially perform a prefrontal lobotomy with your hat pin then don’t expect the TSA security officers to let it pass through the checkpoint.

Weapons are always prohibited from hand luggage and it’s the TSA officer at the checkpoint that decides when a harmless hat pin becomes a dangerous weapon.

Alexandra was advised to pack this one in checked luggage:

Small hat pins and hats with badges are permitted in hand luggage.

Hailey got the go-ahead from the TSA:

Cassandra wanted to bring a hard hat in carry-on luggage:

The TSA is responsible for aviation security and they don’t view hard hats as a threat.

Airlines have carry-on luggage size restrictions so a hard hat clipped onto luggage would probably make the luggage oversized.

However, once you put a hat on your head…

Well, then it becomes clothing.

Jason asked Delta if he could bring his har hat on the plane:

If you are flying with a budget airline like Spirit or Frontier double check that your hard hat will not use up your luggage allowance. Budget airlines do rely on luggage charges to turn a profit so they might want to charge you extra to bring a hard hat on the plane.

Sarah had a really good reason for needing to wear a hat through airport security.

If you really need to keep wearing your headwear the TSA will try to accommodate you. This might involved patting your head to make sure that nothing is concealed under the hat.

Let the TSA officer know that you need to keep the hat on when you get to the checkpoint.

Generally the TSA would prefer it if passengers removed hats when they are going through airport security.

Place your hat in a separate bin so it can go through the x-ray machine.

If you need to keep your headwear on for religious or medical reasons then explain this to the TSA and request a pat-down screening.

If they can determine that there is nothing concealed under your hat you’ll be able to pass the security checkpoint.

Once you are on the plane many would consider it to be good manners to remove your hat.

It used to be common courtesy to remove your hat when indoors and the airplane cabin is indoors.

Cabin crew probably wouldn’t say anything to you about wearing a hat on the plane if it was a small hat.