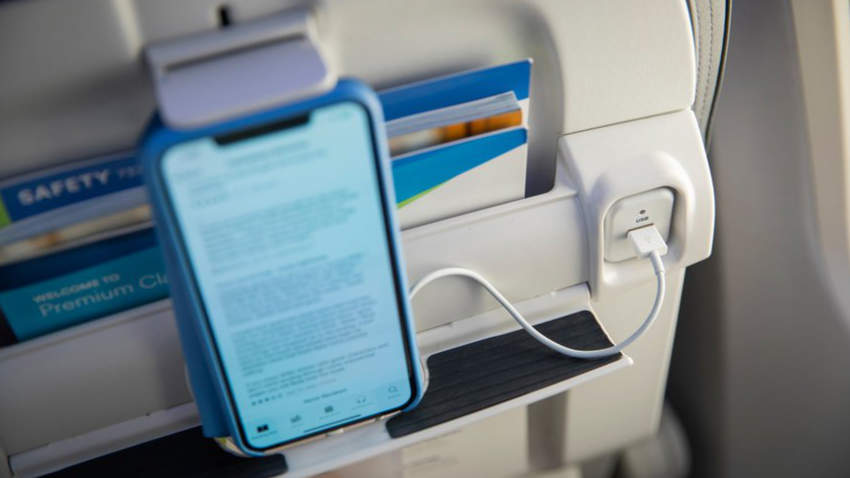 These days we consume a lot of media on our phones.

Your smartphone can be a great way to watch Netflix on the plane. You just need to download something before the flight, switch on airplane mode, and then you can relax and watch your favorite show.

You can even use your Bluetooth headphones during the flight.

But what happens if you are running low on power? Can you charge your phone on the plane?

Do Airplanes Have Outlets?

Not all planes have ac power outlets or USB ports. Some have them but only for premium seats.

Alaska has been ahead of the game for some time.

They provide both a power outlet and a USB port for the majority of their flights and it makes their passengers very happy!

And it’s not just business class or first class, all seats in the main cabin get a way to charge their phone, tablet, or laptop during the flight!

Allegiant does not have any electrical outlets onboard for passenger use.

While Sam flew on a plane that didn’t have a power outlet American claimed: “the majority of our flights are wired for power at every seat.”

When you book your Delta ticket you can see which seats have power during the seat selection process.

During the travel planning process, customers have an icon indicator for in-seat power right in the purchase path on delta.com for each flight where it is offered.

Frontier doesn’t offer any power outlets on their flights leading to ridicule by some of their passengers.

Hawaiian have power outlets under each seat on their Airbus A330 planes but only on their first class, business class, and extra comfort seats.

In the main cabin, USB power outlets are available.

But if you are flying on any other

Our First/Business Class cabin as well as our Extra Comfort seats in our Airbus A330 & A321neo aircraft have electrical/power outlets under each seat available for cell phones/smartphones, tablets, laptops, or other electronic devices. Within the Main Cabin, USB power outlets are available for our guests to charge their small personal electronic devices such as their cell phone/smartphone.

If you are flying on a newer A321 plane each seat will have a power outlet where you can charge your cellphone.

The older style A320 planes are in the process of being upgraded.

Southwest doesn’t offer any power outlets on their planes so you’ll need to make sure your phone is charged up before you depart.

Spirit doesn’t offer any power outlets on their planes meaning you can’t charge your phone on a Spirit flight.

Some newer planes in the United flight have power outlets.

You can check which United planes have power ports on this page.

How To Charge Your Phone Without An Outlet

You can bring a power bank or a battery charger on the plane in your carry-on baggage. That way if your particular airline doesn’t have any outlets you’ll have an alternative charging technique for your mobile devices.

Lithium-ion batteries are allowed through airport security if they are under 100-watt hours. You are not permitted to pack them in checked luggage.

For lithium-ion chargers, 100-watt hours is equivalent to 26,800 mAh (milliamp hours). So if your portable charger is under 26,800 mAh you are free to pack it in your carry-on.

Here’s is a good power bank that is under the maximum power capacity for carry-on luggage.

The Anker PowerCore 26800 can charge most phones 6 times so you won’t need to worry about running out of power.

Even when planes have power outlets sometimes they don’t work, and power outlets in airports are often in high demand, so it’s better to be safe than sorry and bring your own power.

It’s becoming more and more common for airlines to provide a way to charge your phone during the flight.

However not every airline sees this as a priority.

Low-cost airlines are more likely to leave you high and dry. They prefer to keep their flight prices low.

On some planes, not every seat will have a power outlet or USB port. It might only be something that you get with a premium seat.

If you want to be certain that you’ll be able to meet your power demands then traveling then a portable battery really comes in handy.

Small power banks that can charge your phone several times over are relatively cheap these days.

Most airlines will sell you a battery charger on the plane, but you’ll get a much cheaper price if you plan ahead and buy one now.

We love to travel light here but a portable power bank is a gadget that really earns it’s place in your carry-on bag.