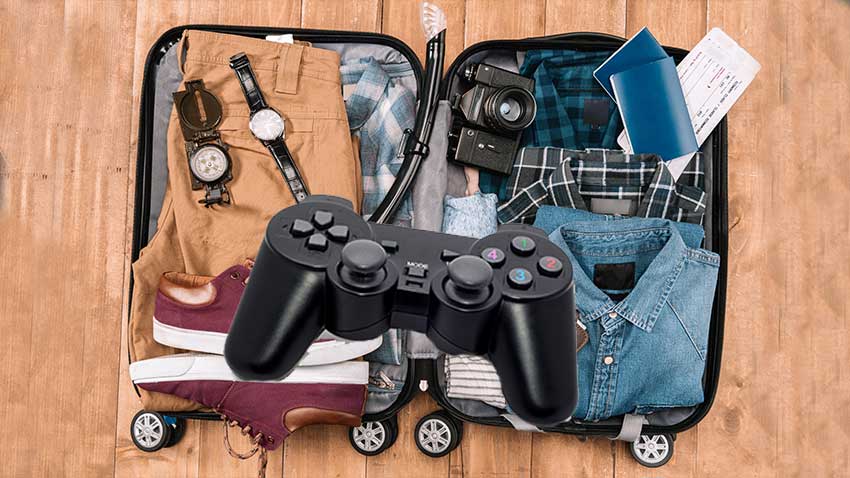 So you are traveling on a plane and want to take your gaming setup with you.

You’re not the only one! Many passengers pack their Xbox, PS4, or Nintendo Switch when flying.

This is post all about the regulations and where it’s best to pack video game consoles.

The Transportation Security Administration are responsible for what can and can’t be brought on to airplanes.

If you want to bring your Xbox, PS4, PS5, or Atari 2600 with you when you fly you’ll need to get it past the airport security check point.

Here’s what they say about bringing video game consoles.

Bringing An Xbox or Playstation in Carry-On Luggage

You can pack an xbox, PS4, or other video game console in carry on luggage.

When you get to the x-ray machine remove any game consoles from your carry-on bags and put it in a separate bin. Just like you would do with a laptop. You need to do this with any personal electronics device larger than a cellphone.

This is so the console doesn’t obstruct the view of what’s in your bag.

The downside of packing game consoles in carry-on bags is the space they take up. Sometimes it can be hard to fit everything you need in your bag. If you are a heavy packer then try some of our packing light tips.

On the plus side, since you are the only one that handles your carry-on bag then you can make sure it doesn’t get thrown around.

Keep in mind that if you board the plane last there might not be space in the overhead bins. When this happens you might be forced to check your carry on bag. If this happens it might be a good idea to remove your xbox or PS4 from your carry on and bring it on to he plane as an underseat item.

Make sure you have some kind of bag so that you will be able to do this. A console carrying case like this one would be permitted as a personal item with most airlines so you wouldn’t even need to pack it in your carry-on and could place it under the seat in front.

Bringing An Xbox or Playstation In Checked Luggage

You can pack game consoles in checked luggage, but there are a few reasons why it might not be the best idea.

Video game consoles are fragile and can be damaged if the luggage is thrown around by baggage handlers. Also there is a risk of theft it’s not unusual for valuable items to go missing from hold baggage.

And of course, maybe the airline will just lose your bag entirely. It’s rare but it does happen.

Still Not Sure? Ask The TSA

If you have further questions you can go on Twitter and ask the TSA. They are usually very quick to respond.

Derek was going through TSA PreCheck the expedited security screening program. The TSA confirmed that he wouldn’t need to take his Xbox out his carry on in the PreCheck lane.

Lyko traveled with a VR headset and xbox controllers in a hard plastic case.

This passenger wasn’t happy that his Xbox series X was damaged in checked luggage.

The issue is that they won’t be able to know who damaged it. Was it the TSA, was it the airline, or the airport staff? Good luck getting any compensation for it. This is why it’s better to pack your Xbox in carry-on luggage if possible.

April asked where would be best to pack her Xbox one controller.

The TSA simply replied that controllers are allowed in both carry-on and checked bags.

This is true, but I won’t sit on the fence. It’s much better to pack controllers in hand luggage.

For a start they are small so it shouldn’t be a problem to do so. Secondly, they often contain lithium-ion batteries and these are a fire risk. Loose, spare lithium batteries are banned from checked luggage because they can catch fire. While you are allowed to pack installed lithium-ion batteries like the ones in your controller in hold luggage it’s much better to pack them in carry-on bags.

Adi asked about bringing video games in her carry-on bag. While you need to remove the console and place it in a separate tray at the security checkpoint you should be able to keep the actual games in your bag.

Good news for PS5 owners. Even though the PS5 uses liquid cooling you don’t need to put it in your toiletries bag and the TSA allow you to bring it on a plane.

Anger was planning on packing a PS4 in his backpack.

To sum up, you can bring your video game console with you on your next flight. It’s not really any different from bringing a laptop.

The smart way is to pack it in carry-on luggage if you have the space to do so. You can buy travel cases for most consoles. Make sure you have some kind of bag for the console in case you are forced to gate check your carry on.

Some budget airlines don’t allow free carry-on luggage and you may need to pay a small fee to be permitted a large enough bag.