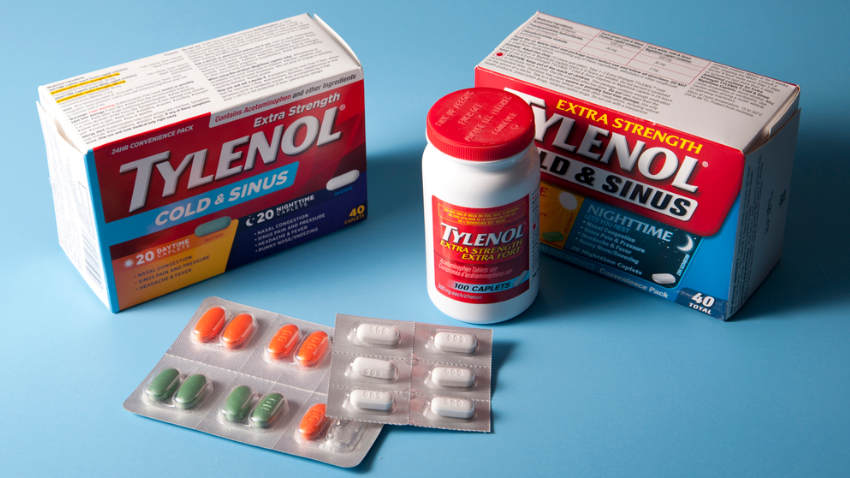 Tylenol is a popular medicine for pain relief.

But can you take Tylenol onboard a plane and where should you pack it?

Let’s see what the TSA says.

The Transportation Security Administration screens both carry-on luggage at the airport security checkpoint and they also screen checked luggage behind the scenes.

They don’t mention Tylenol specifically on their site. Tylenol is a brand name for acetamoniphen or paracetamol.

Usually it comes in pill form so here’s what the TSA says about bringing pills in your luggage.

Like prescription medicine, Tylenol pills are allowed on planes. You can pack them in your carry-on luggage or checked luggage.

You don’t need a prescription to bring Tylenol on a plane.

Tylenol soft gels are not considered to be liquids and don’t need to be packed in your quart-size liquids bag.

You might be planning on bringing a bottle of liquid Tylenol rather than the solid form. Liquid Tylenol doesn’t need to be packed in your ziploc either because it qualifies as a medically necessary liquid.

There are special instructions for bringing liquid medication on a plane in hand luggage.

Since liquid Tylenol is a medicine it is exempt from the TSA 3.4 oz liquids limit.

If you want to avoid that, you could decant some liquid Tylenol into a travel size bottle and pack it in your quart-size bag. That way it wouldn’t need to be placed in the screening bin separately but it would use up space in your toiletries bag that you might need for toothpaste or shampoo.

You can pack Tylenol in liquid or pill form in your checked baggage but it’s not advisable.

Where You Should Pack Tylenol When Flying

The best place to pack your Tylenol or any other medication is in your personal item bag. That’s your purse, handbag, small backpack, or briefcase. It’s the bag that you put under the seat in front of you.

If you pack your pills in your checked luggage then they won’t be available to you during the flight.

There is also the chance that your checked baggage could be lost or delayed.

Packing medicine in your carry-on bag is better but remember that there is always the possibility that your carry-on suitcase could be gate-checked if space in the overhead lockers is running out.

For that reason, your personal item bag is the best place to pack any medicines like Tylenol.

You can double-check with the TSA about packing any medicines.

Heather asked if she could bring an already opened bottle of children’s Tylenol:

Zach asked if opened baby Tylenol is allowed in a carry on:

The TSA replied, “You may bring opened or sealed medically necessary liquids in excess of 3.4 ounces in carry-on bags”.

So it isn’t a problem if your Tylenol bottle is already opened.

Paul asked if it was okay to bring bottles of liquid Dayquil in his carry on luggage even if they are over 3 ounces:

The TSA gave him the go ahead saying, “Yes, bottles of liquid medication over 3.4 ounces are allowed in carry-on bags. However at the checkpoint, pls remove them from your bag and place them in a separate bin for X-ray screening.”

You can bring Tylenol on a plane. If it’s solid form pills or gel capsules there are no special instructions. If you are packing liquid Tylenol you should place it in the bin at the security checkpoint for additional screening.

There are no rules around packing Tylenol in checked bags but it’s not really a good idea. It’s always better to keep medication handy in case you need it during the flight!