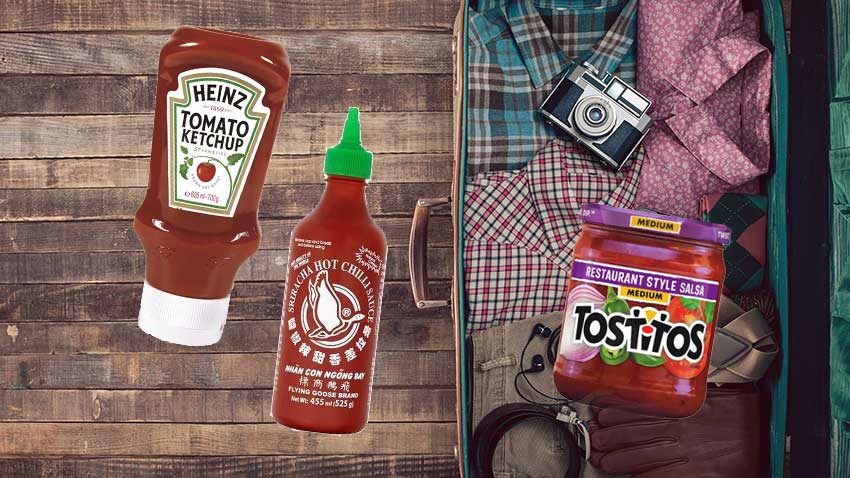 Hot sauce can be dangerous, it can blow your head off, or burn your mouth.

Ketchup can leave a nasty stain on your shirt.

But is sauce a threat to aviation security? Can you bring sauce on a plane?

Let’s see what the TSA says.

The Transportation Security Administration runs the show at the screening process at the airport security checkpoint.

They also screen millions of checked suitcases behind the scenes.

They are the team that will decide if you can bring your sauce or not.

Here’s what the TSA says about salsa and sauce on their website:

Salsa, hot sauce, ketchup, dressing, gravy, or relish. Call it what you like. Sauces are usually liquids.

That means that for carry-on bags the TSA liquids rule applies.

You can only bring salsa or hot sauce in containers that are 3.4 oz or less. Those containers must be packed in your one quart-size plastic bag.

So basically, kick out the shampoo or shower gel and you can make room for a little bottle of hot sauce.

If you want to fly with larger quantities of salsa or sauce then you’ll need to pack it in checked luggage.

There are no restrictions on how much sauce you can pack in checked bags.

And if you are bringing a dry packet sauce then you don’t need to worry about the liquids rule.

The TSA officers at the checkpoint always have the final say about what you can bring on the plane. If they have any security concerns about your sauce they can refuse it. A container of sauce that is under the size limit is generally permitted.

If you have any questions about packing sauce when flying you can ask the TSA on Twitter. They are really good at getting back to you quickly.

Caitlyn asked the TSA about bringing 5 ounces of hot sauce on the plane:

The TSA delivered the bad news. Heatonist needs to start making hot sauce in travel-size containers! There is a gap in the market!

You’ve got to hand it to Samantha who is a bona-fide travel packing genius.

She managed to take a large quantity of homemade spaghetti sauce in her carry-on luggage because it was frozen!

You can bring frozen sauce on a plane. It doesn’t need to be under the 3.4 oz limit, it does need to be frozen solid when going through the security checkpoint.

How Samantha managed to get the sauce to the checkpoint still frozen I’m not sure. It could be packed in ice packs that are discarded once you reach the checkpoint. Or maybe she used dry ice.

Here’s another way to get pasta sauce through the x-ray checkpoint.

Molly asked if she could bring pasta that has marinara sauce mixed in as a carry-on item.

The TSA can be weird sometimes.

Marinara sauce is a restricted liquid.

Pasta with marinara sauce is a solid that is unrestricted in hand luggage.

How much pasta do you need to add pasta sauce to make it legit?

Well, there are no rules about that. The TSA officer that inspects your luggage will make the call. Just hope that he isn’t hungry! Joke!

Sandy’s aunt wanted her to take a pint jar of chili sauce back to Boston.

The liquids rule means that it couldn’t go into carry-on luggage like that.

To check it would probably cost $40 or something close to that for a checked bag. That’s expensive chili sauce.

Sandy could try to freeze her sauce as Samantha did with her pasta sauce, but there is another way.

The glass jar can go in carry-on luggage if empty.

A pint of chili sauce would fit into 5 small travel-size containers. These could all go in the quart bag. You know shampoo, shower gel etc can all be bought anywhere. But her aunts chili sauce was special.

So ditch the toiletries and fill the quart bag with little containers of chili sauce.

Then it can be poured back into the glass jar after the security checkpoint has been cleared. Mission accomplished!

This is exactly the strategy that Justin used to hack the TSA rules and fly with a ton of wing sauce!

Look at those little travel-size containers of wing sauce lined up. Don’t you love it when a plan comes together!

Thomas had an unusual question. He wanted to bring a bottle of hot sauce shaped like a grenade in his checked luggage.

The TSA would view that as a replica grenade and there is every chance it would be confiscated from Thomas’s checked suitcase.

It would be better to transfer the hot sauce into a bottle with a different shape.

Frank explained to the TSA that he was going to bring 2 gallons of Sonny’s BBQ sauce in his checked suitcase.

He explained that he would tape the cap and put them in separate Ziploc bags to prevent leaks.

The thing is, the TSA doesn’t care if you leak BBQ sauce all over your clothes. They only care about aviation safety.

And BBQ sauce in checked luggage is not a threat. So Frank would be permitted to pack as much BBQ sauce in his checked bag as the weight limit of his airline would allow.

Pesto is a concentrated sauce. It should be easy to bottle it in travel size bottles that are under 3.4 oz.

Shelia wanted to bring home some tartare sauce from Cincinnati:

Unfortunately, the containers of tartare were too big to be packed in hand luggage. When the TSA sees a passenger flying with large quantities of liquid in their carry-on they worry that there is something fishy going on! Ba Boom! Tish!

Melanie wanted to bring Zaxby’s sauce on the plane. She knew about the 3.4 oz rule but didn’t know about the quart-size bag rule.

You can bring as many sauces that are 3.4 oz or less as you can fit in one quart-size ziploc baggie.

I think she might have just managed to squeeze all 16 sauces in her ziploc if she didn’t take any other toiletries.

Amy was planning on taking sriracha sauce on her international travels.

The TSA recommended that she checks the customs rules about importing sauce to her destination country. Some countries have strict rules about bringing foods into the country.

Terry was bringing a lot of cocktail sauce:

Large quantities of cocktail sauce would need to go in checked luggage.

A typical tupperware of sauce container would be too large for carry-on luggage.

What’s all the fuss about sauce? It’s not dangerous so why is it restricted in hand luggage?

Well… the TSA can’t tell from the scanner if your sauce is really just sauce. It could be a flammable liquid disguised as hot sauce.

So for safety purposes liquids are limited to smaller quantities.

Sauce is considered a liquid so it can only go in travel-size bottles in hand luggage.

You can pack as much sauce as you want in checked luggage.

If you are the type of person that makes their own sauce then consider packing the solid ingredients and making the sauce or salsa at the other end.

You could also ship some sauce to the hotel you are staying at in advance.