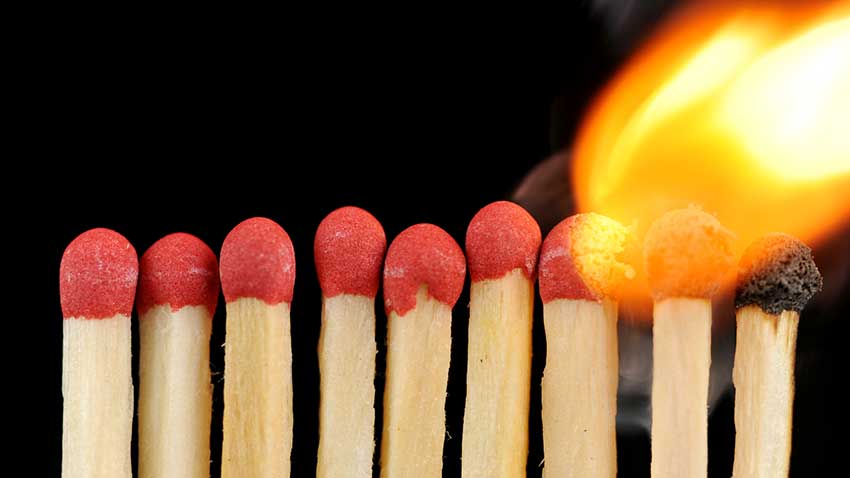 Fire! Humanity’s greatest invention! Gathered around the campfire our ancestors once dreamed of taking to the skies like the birds.

And thanks to the Wright brothers we finally made it. We also captured fire and stored it in little cardboard boxes ready for whenever we need it.

But are matches allowed on airplanes? Can you fly with matches? Do we need to revert back to starting fires by rubbing sticks together? And where did all the woolly mammoths go?

The Federal Aviation Authority are the agency that set the rules about aviation safety.

And the Transportation Security Administration is there on the ground to enforce the rules.

The TSA are those mean-looking folks that scan your hand luggage with the x-ray machine at the security checkpoint and they also screen and search checked bags behind the scenes.

According to the TSA, you are not permitted to bring strike-anywhere matches on a plane in either your carry-on luggage or your checked luggage.

Don’t mess around with this. Strike anywhere matches are prohibited because they can occasionally ignite while in transit. While any fire on a plane could be serious, a fire in the baggage hold could be catastrophic.

It’s not just the aviation industry being overcautious. Strike anywhere matches are also restricted in mail too because they are a hazardous material and classed as dangerous goods.

And now the slightly better news.

Safety matches are the type of matches that only spark when you strike them on the specially prepared striking surface.

But all matches are clearly highly flammable, so even safety matches are banned from checked baggage. In the luggage hold there will be nobody around to put out a fire so matches of any kind are not allowed.

The Federal Aviation Administration has decided that safety matches are okay to bring on planes in small quantities.

Actually the FAA says you can bring “One book/packet of matches in carry-on or on the person.”

So I decided to try to find out more about the quantity of matches permitted to be brought into the cabin.

A Book Of Matches, A Packet, Or A Box?

I wasn’t the only one to wonder about this. Joesph asked if a book was the same as a box.

Here the TSA said that Joseph could bring a box of safety matches. So it seems to be more in line with the FAA guidelines.

Brooke asked about bringing a box of gift matches in her carry-on.

And the TSA said that the large box of safety matches would be allowed in hand luggage.

Steve asked about bringing a box of matches.

So storm-proof or water-proof matches are not allowed on planes. You can take a lighter too!

If you’re like Candace and not entirely sure what safety matches are here is your answer:

The TSA replied, “Safety matches ignite only when struck on a specially prepared surface, especially the side of a matchbook or matchbox”.

Sometimes you reach the boarding gate and the airline agent tells you that there is not enough room in the overhead bin and your carry-on bag will need to be checked.

If that happens when you fly you must remove any matches that are in your carry-on bag and take them into the cabin with you. You should also remove any valuables too while you are at it.

You cannot pack any type of matches in checked luggage.

The only matches that you are permitted to bring when flying are safety matches. You must pack them in your carry-on or have them in your pocket.

As for size, you can bring one book, packet, or box of safety matches.