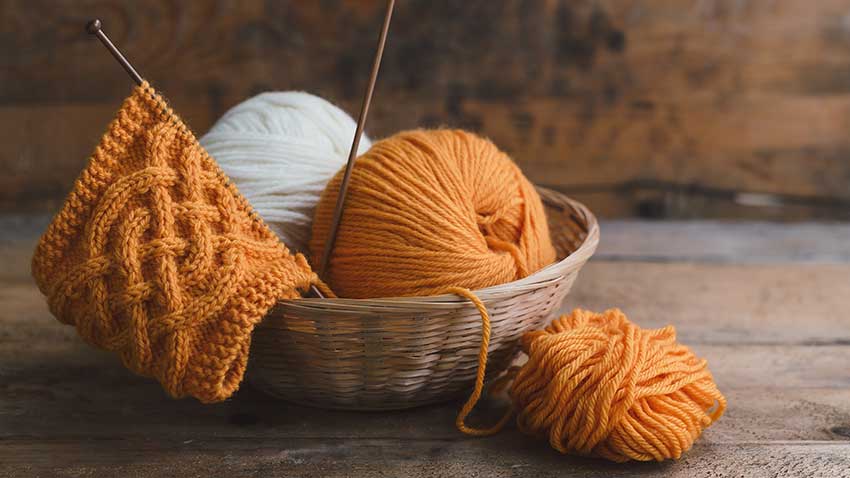 One of the great things about knitting is that it’s a very portable craft. You only need a ball of yarn, your needles, and you can take your knitting project anywhere.

A knitting project would provide something to do while waiting for a delayed flight or even during a long flight to help pass the time.

But wait! Knitting needles are sort of sharp and pointy and perhaps could be dangerous…

So can you bring knitting needles on a plane where dangerous items are not permitted? And will the flight attendant allow you to actually do some knitting during the flight?

This post looks are the rules on taking knitting needles on a plane either in your carry-on luggage or checked luggage.

The transportation security administration is responsible for flight security in the united states. These are the officers who screen your bag at the security checkpoint and the people who scan and potentially inspect your checked luggage behind the scenes.

Let’s see what they say about knitting needles:

The TSA gave more details on another page:

So not only can you pack knitting needles in your carry on bag you can get them out and knit during the flight too!

Alisha on Twitter wonders why people hate flying. For her it’s a great opportunity to get some knitting or reading done when she flies with American Airlines:

It seems that all the US major airlines like American, Delta, JetBlue, Frontier, Southwest, and United are all fine with knitting on planes.

Just remember to be respectful to your neighbor and fellow passengers, this One Direction fan was elbowed 10 times by an in-flight knitter:

Can you bring knitting needles in checked baggage?

Yes, if you just want to bring your knitting project on vacation with you and don’t intend to knit on the plane you can pack your knitting needles in checked luggage.

It would be better if they are sheathed so that any baggage handlers rummaging through your smalls don’t injure themselves accidently.

Keep in mind that checked luggage does occasionally go missing and if you do pack your knitting project in hold luggage there is always that little chance that you might never see it again.

While these are the TSA knitting needles rules keep in mind that the final decision is always made by the TSA security screen officer on the ground. They do have the right to refuse your knitting needles if they deem them a threat.

What About Knitting Accessories?

Circular thread cutters are not allowed on planes in carry on luggage. This is because of the blade that they have inside them.

Large scissors are not permitted, but craft scissors with small blades are fine.

If departing from the US you will be able to take your knitting through the TSA security, but what about the return trip?

This video from George has many great tips about flying with knitting needles. Although note he is mistaken about circular thread cutters:

George has flown all around the world while knitting so it is possible.

Can you take knitting needles on a plane in Europe?

I checked what some of the European airlines were saying about knitting needles:

Lufthansa admit that it’s not their decision and the airport security officers decide. They do recommend that you pack them in checked luggage.

Dutch airline KLM don’t want you to bring knitting needle on board.

Spain’s Iberia say they can’t guarantee knitting needles will be allowed in the cabin because “de seguridad permitan aquello en maleta de cabina” or “security decides what is permitted in the cabin”.

There is no TSA equivalent that covers all of Europe. Each individual country sets their own aviation security rules.

The European Union does set some rules about banned items and knitting needles are not one of the banned items.

Can you fly with knitting needles in the UK?

In the UK knitting needles are permitted in both hand luggage and hold luggage. As a colder climate, the British are keen knitters and it’s not unusual for people to travel with knitting.

If you are flying domestically in the US you should have no problems bringing your knitting on to a plane and even doing some in-flight knitting to pass the time.