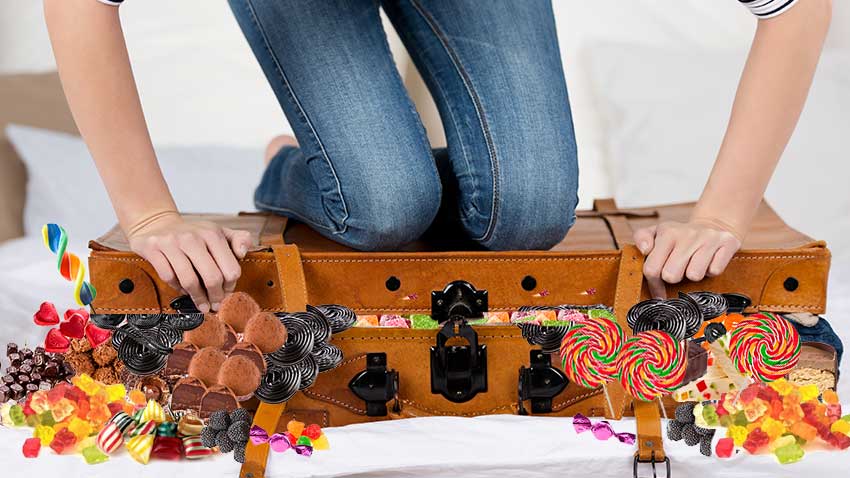 Soon you’ll be sitting in an aluminum can with wings, going not far off the speed of sound, 6 or 7 miles up in the sky, thrusting forward by the power generated by the exploding remains of dead marine creatures that lived 100 million years ago.

I get it… it’s probably going to be really boring.

You’d better pack some candy for the plane to keep yourself entertained!

This post is about the rules for taking candy on a plane, where to pack it, and how to get it through airport security.

Whether you want to bring candy to eat on the plane, or you are packing some candy to take home in your hand luggage, the TSA is pretty relaxed about taking candy through airport security.

The TSA is mainly concerned with keeping passengers safe. They want to spoil the plots and schemes of the bad guys.

Here is a screengrab of the relevant rule:

So can you take candy on a plane? Yes, the TSA will allow you to bring candy through security in your carry-on luggage. All solid candy is okay to take through airport security.

You can bring candy in your hand luggage provided it is not “liquid candy”.

What’s a liquid candy I hear you ask?

The gel candy as pictured above would need to go in your liquids bag and follow the 3-1-1 liquids rule. Well actually those tubes look a little larger than the 3.4 oz maximum, but you get the idea.

Liquid candy is banned from planes. Thankfully, if you can read this sentence you’re probably a bit older and more into solid candy.

Even if your solid candy includes a gel, liquid, or paste filling it will be okay. Chocolate candy bars with squishy fillings are okay to bring on planes.

So you don’t need to pack a Snickers in your toiletries bag even though the caramel in the middle isn’t solid.

Gummy Bears & Other Candy You Can Take On Planes

There are rumors going around that gummy bears are not permitted in hand luggage. This is just a wicked, wicked lie.

You are able to take gummy bears on planes. I checked what the @AskTSA service on Twitter had to say about this important matter.

Just to prove it’s not a mistake…

Note: I strongly advise against eating sugar-free gummy bears on a plane. Or anywhere other than while sitting on a toilet. You’ve been warned.

But what other candy can you take on a plane in your carry-on?

Melissa got the thumbs up for taking peanut M&M’s in her hand luggage.

Kindra got the TSA’s blessing to take her regular Snickers:

Danielle was delighted to be able to take her Starburst and Skittles on her flight.

Alex was over the moon to be taking his Twizzlers in his carry-on luggage:

It doesn’t make any difference if candy is opened or unopened, so long as it’s solid you can take it through airport security.

And in case you are wondering about lollipops, you can take giant Chupa Chups with you when you fly.

@TSA @AskTSA they’ve never seen a giant chupa chups but i was able to take it thanks for the information pic.twitter.com/SIdaumuquL

Size doesn’t matter. Kevin was taking a 3 lb gummy worm on his flight!

So large or small you can pack your candy.

And I know some of you might be bringing home candy as a souvenir gift.

Like Sam who brought home some salt water taffy from Florida

You can pack salt water taffy or toffee in your hand luggage.

Michael brought some cough drops in his carry on:

Sergey wanted to bring Altoids on the plane for an international flight:

And the TSA confirmed to him that you can bring mints on a plane.

I think you’re probably getting the picture by now. You can take candy on a plane, but one word of caution…

Who Can Stop You Bringing Candy Through Airport Security?

You might have been feeling pretty pleased with what you’ve read in this post so far. But be warned, there is one person who could potentially stop you from taking candy onto a plane.

Every TSA officer has the right to refuse any candy that he doesn’t want to let through. Even though it’s the general rule that candy is allowed on planes there is nothing to stop a peckish TSA officer from confiscating your candy at the checkpoint.

Also, remember liquids are restricted. So if your candy melts or is more liquid than sold then you might run into problems.

While the TSA permit candy on planes they reserve the right to refuse anything through the security checkpoint.

Does Candy Go In Carry-On Or Checked Luggage?

You just need to think…

How much candy will I pack in my suitcase?

Do I even need these clothes anymore?

Would a carry-on suitcase be large enough for all the candy that I want to take with me?

Also, if I have a candy emergency, will I be able to access my candy at short notice during the flight?

Personally, I pack my in-flight candy in my personal item bag so that it’s not stowed away in the overhead bin but instead under the seat.

I pack my personal candy in my personal bag… understand? It’s personal! Get your own candy!

So that’s the candy sorted… Now did you remember to download a movie on Netflix to your phone to watch on the plane?

You’ll make it through this boring flight somehow!