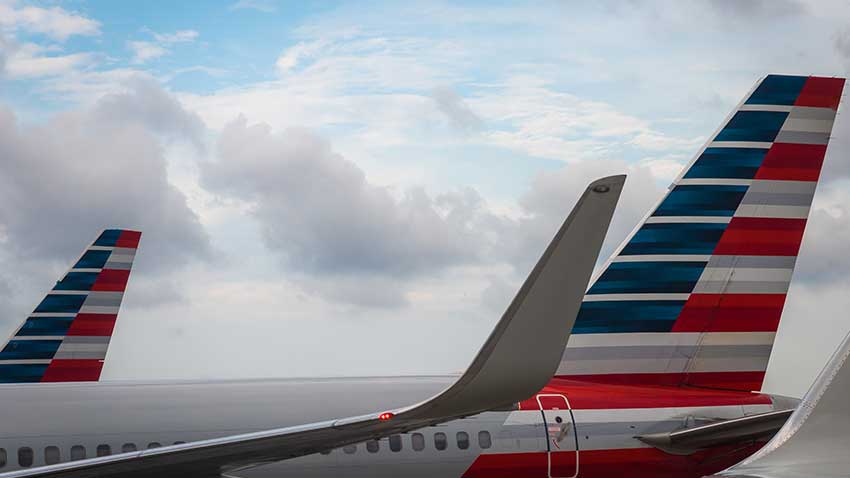 The pricing models of airlines are so complicated it can be really difficult to figure out which fare class is the best choice.

Read on to find out what’s basic about AA basic economy.

Previously an American Airlines basic economy fare did not allow you to bring a carry-on, but thankfully that changed, and bringing carry-on luggage into the cabin was reinstated.

There’s not as big a gap between the two fares as there used to be regarding baggage allowance.

I know you are busy, so I’ve summarized the difference between basic economy and economy in this table.

Sometimes the best way to find out what the deal is with no-frills flights is to check what travelers are saying on social media.

If there’s a catch or a scam you can always depend on people to be outraged on Twitter.

AA Basic Economy goes down reasonably well. You only need to compare what people are saying about United Basic Economy to see that what AA is doing could be a lot worse.

One of the most inconvenient American Airlines basic economy rules is that tickets are only eligible for same-day flight changes.

Not long ago everyone was celebrating that AA had got rid of change fees. Had things improved?

As they say “the devil is in the detail”:

Basic Economy tickets have never been changeable. The change charges were eliminated for travelers with a regular economy ticket.

So if something crops up and you can no longer make your flight there is officially no amount of money that AA will accept to change the date of your ticket.

Airlines are confident that some passengers will not show up for the flight. They are so confident they sell more tickets than there are seats on the plane.

No cancellations and no flight changes mean there is an increased chance you’ll buy a ticket that you never use. AA will keep your money and sell the seat to someone else.

In this sense, while an AA basic economy ticket is cheaper it’s more of a gamble.

What’s more, if you miss the 1st leg of your flight AA will cancel your return flight too. Even if you can still make it. Kelsey felt that was highway robbery!

Sam has the same problem as Kelsey and felt that with basic economy you waive your rights to customer service:

So think carefully before you book a basic economy flight. Are you sure you can make the dates?

If you do book a basic economy flight by mistake you only have 24 hours to cancel it. Otherwise, AA will keep your money, even if the flight is months away.

Scott got a shock when he checked in for his flight and wasn’t allocated a seat next to his wife. He could see that “half the plane” was available but they’d both been allocated a middle seat.

American wanted to “help” but they wanted $35 to find them a seat together. I don’t think that’s the kind of help Scott had in mind.

With basic economy tickets you don’t get to choose your seat unless you pay extra:

Sometimes this seat selection nonsense can lead to awkward moments. This fierce Mama didn’t get allocated a seat next to her 3-year-old. And the flight attendant gave her a lecture about basic economy preferred seat selection.

Mum’s sitting with kids isn’t some kind of luxury add on. It’s basic common sense, but it doesn’t always seem to happen with basic economy flights.

Tom also had problems sitting next to his kid:

Passengers like Val find it strange that even with flights costing “almost 2 grand” they can’t sit together:

Jon paid extra to get a main cabin extra seat, but that didn’t come with a better boarding group:

So because he was in the last boarding group there was no space in the overhead bins meaning he had to check his carry on.

Dennis is a concierge key member meaning that he probably spends $50k per year with American.

But remarkably if he buys basic he’s still basic:

At least Dennis can use his dedicated customer service hotline to complain about it. Or moan to the guy that picks him up in the limo to whisk him to connecting flights.

Having An American Airlines Branded Credit Card Can Help

The basic in “basic economy” is about removing perks, but a branded credit card can bring back some perks.

Some of the perks that you lose with a basic economy ticket are restored if you have elite status.

All these credit cards will get you priority boarding:

That will let you skip the line and find a place to store your carry on.

If a carry-on bag isn’t enough for you then most AAdvantage credit cards will score you free checked bags on domestic flights.

Elite Status Helps A Lot Too

AAdvantage elite status passengers enjoy an earlier boarding group. This means you’ll be able to get settled into your seat early and find a place for your carry on bag in the overhead bin.

Elites can also get Main Cabin Extra or Preferred seats at no cost at booking or check-in — depending on your status.

JT was thrilled that policy changed mean elite members can get first-class upgrades.

The problem with flying basic economy with Elite status is that you will stop earning the elite qualifying miles EQM and elite qualifying segments EQS that allowed you to become an elite in the first place.

That means that it might make sense flying basic economy for some routes and for other routes continue to fly main cabin to accumulate miles.

It all depends what the price difference is between basic and regular economy. This can vary wildly with main cabin sometimes costing 10% more and sometimes 100%.

What is basic economy on American Airlines?

Like other airline’s basic economy fares, it’s a pricing strategy where the ticket price is cheaper but the airline will then try to “annoy” you into paying extra or just keep your money if you need to change your plans.

It’s not quite ‘bait and switch’, but it’s more like bait then disappoint you enough so you’ll decide to make the switch yourself. It’s like the dollar menu at McDonalds… cheap but not really what you wanted.

What is the difference with American Airlines basic economy vs economy?

The main difference is the ability to cancel your flight or change your flight dates. Basic economy fares cannot be changed after 24 hours.

This means if your plans change you might end up with a ticket that you can’t use.

The second major difference is that you cannot choose your seat unless you pay extra. If you don’t want to pay extra AA will automatically assign you to the shittest seat their algorithm can find.

How do I know if I have basic economy on American Airlines?

Basic economy is AA fare class B. Check your reservation. If the first letter of your booking code is B then you’ve booked a basic economy ticket.

How do I add a checked bag to an AA basic economy flight?

You should be able to pay for a checked bag at the time of online check-in. If you have the right credit card you might be able to get a free checked bag.

Can I pick my own seat when flying AA basic economy?

You can 48 hours before your departure, but there is an additional fee for seat selection. If you don’t pay this fee you seat will be allocated automatically at check-in. Hello middle seat.

How much does seat assignment cost when flying AA basic economy?

It depends on which seat you want to choose and what flight you are on. It could be $10 or it could be $100… it’s not insignificant especially when it’s both ways.

Seat upgrade cost is generally proportional to the ticket cost. So it will cost more to upgrade a seat for an international flight than a short domestic flight to a local destination.

If you don’t pay the fee your seat will be assigned at check-in. Seats together are not always possible.

Can you bring a carry on with basic economy fares?

What is Main Cabin vs Regular Economy?

AA Main Cabin is what some other airlines call standard or regular economy. It used to be the most basic American fare. Until they introduced Basic Economy which was more basic than the basic fare. But Basic Economy is still a main cabin fare. You’re not stored in the luggage hold or seated in the restroom or anything like that.

What is Main Cabin Extra?

Normally the “Extra” is 6 inches more legroom and earlier boarding. But if you are a basic economy passenger that paid for main cabin extra seats you get the seat but not the earlier boarding. You’ll still need to board last with the other basics.

What the fee for Basic Economy checked baggage?

Unless you have qualifying status the fees for checked bags for Basic Economy are the same as the fees for Main Cabin. Around $30 per bag each way.

AA Basic Economy tickets mean less flexibility for travelers and more restrictions. This is the same for all basic economy fares.

“Use it or lose it” is the main drawback closely followed by the inability to choose your own seat.

Most of the perks that you lose when you travel with a basic economy ticket can be purchased at an additional cost.

It’s a good option for passengers who want the cheapest price, don’t mind where they sit, and are confident they won’t need to change flying dates.

Basic economy flights also suit passengers that know to travel light. So much of the pecking order is about making sure you’ll be able to find a space in the overhead bin for your carry-on.

If you are flying with only under-seat luggage you’ll happily board last, avoid the scramble, and simply slide your bag under the seat.